Britain will leave the European Union in March 2019 – and will need to decide on a new approach to immigration. While the central fact of Britain’s referendum decision remains unchanged and the Article 50 clock keeps ticking, much of the detail has been thrown up in the air by the June 2017 General Election. Voters did not give Theresa May the large majority she requested, a personal mandate with which to steer through her own, unyielding vision for Brexit.

A report from British Future, Time to get it right: Finding consensus on Britain’s future immigration policy, offers a navigation through this new context for immigration after Brexit.

There is a growing consensus, within government as well as outside it, that a transition period after the UK formally leaves the EU in 2019, during which UK policy remains closely aligned to the current trade and immigration regimes, seems the most sensible way of avoiding an economic shock. That may come as something of a relief for employers worried about the impact of a sudden ‘cliff-edge’ departure from the EU for which they were unprepared. Business will need time to adapt to whatever new trade and immigration regimes Britain has with the EU after we leave.

Just as Brexit means Brexit, however, transition must mean transition. A transition that looks like an attempt to cling on to EU membership indefinitely would not pass democratic scrutiny. And an open-ended transition will fail to achieve its objective for the economy, too – prolonging business uncertainty over when and whether the UK will really leave. A clear, time-limited transition period of around 3 years, with a set end-date, Would help provide certainty. But it will only be of real benefit if business knows, early on, what system it is transitioning to. Companies cannot plan towards a question mark or an open-ended series of possibilities.

So the UK should agree, as soon as possible, a transition deal with the EU, and then move the debate beyond transition to decide what immigration system will be in place after we leave. Brexit is a reset moment for UK immigration policy – but someone does have to press the reset button.

That new system will need to secure the confidence and consent of the public too. This big moment of change offers an opportunity to engage with the public and seek to build consensus and trust in an immigration system which manages the pressures of mass migration in order to secure the gains; which is effective and efficient but also fair; and which secures support across politics, business and the public.

Given the divisions uncovered by the referendum debate, consulting the public may sound like a hopeless task. But such defeatism underestimates the capacity for consensus among the public. New ICM research for British Future in the report uncovers the consensus views on which most voters can agree. 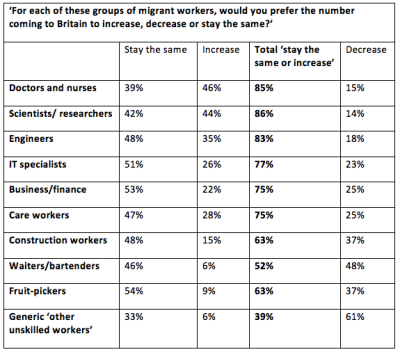 So the first task for the government should be to decide on a new, fit-for-purpose system for immigration that can secure the support of the public, business and politicians. Our proposal – for a system that asserts UK control over low-skilled migration from the EU with an annual cap, while remaining as open as before to migrants above a set skills or salary level – would meet with support from two-thirds of the public while ensuring that employers could still fill skills and staffing gaps.

Second is to respond to concerns about the impacts of immigration in areas where the pace of change is highest, for example on public services and housing, by directing resources to those areas via a better-resourced Controlling Immigration Fund. Concerns about local impacts could also be eased by paying greater attention to integration, at both local and national level.

Thirdly, and crucially, the government should do more to engage the public in decision-making on immigration. The National Conversation Immigration, coordinated by British Future and Hope not Hate, offers a model of how to do this, hosting 120 meetings in 60 locations in every nation and region of the UK, and reporting its findings to the Home Affairs Committee Immigration Inquiry. An annual ‘Migration Day’ report to Parliament by the Home Secretary could also serve as a focal point for greater engagement, transparency and accountability.

The Brexit decision represents an opportunity to engage the public, find consensus and start rebuilding public trust in an immigration system that works for our economy, preserves our values and secures broad support among business, politics and the public. That process should start straight away – because the time to get things right on immigration is now.