COVID-19 prompts new ways to reach out to isolated people

The coronavirus crisis has prompted many individuals and organisations to do something to help others in their communities, writes Steve Ballinger. Among all the images of supermarket fights over toilet rolls and irresponsible trips to markets, there have been scores of more positive stories of people reaching out to others in need – the BBC website recently devoted a day to highlighting some of them. Alongside those examples of civic contribution and local solidarity, the crisis has brought to light the challenges of social isolation – which will only be exacerbated under the strict new measures announced by the Prime Minister.

On my local Waltham Forest Covid-19 Mutual Aid group, alongside dozens of individual offers to help people with shopping or collecting prescriptions, I’ve found advice on home deliveries and mental health during self-isolation; people trying to find a second-hand freezer for someone’s elderly father; and a local removals firm offering their unused vans to distribute food supplies. The WhatsApp group for residents in my street is updated so regularly that I’ve temporarily muted updates. People want to reach out to each other.

Half a million older people regularly experience long periods of isolation, sometimes going five or six days a week without seeing or speaking to anyone at all. When that one weekly opportunity for social contact – a community group or just a trip to the shops – can no longer happen, it can be devastating. So the Coronavirus outbreak has underlined the importance of staying in touch with people who are alone.

A new parliamentary inquiry is examining the successes and difficulties of reaching out to isolated groups during the COVID-19 crisis. The all-party parliamentary group on social integration has issued an open call for evidence, which closes on Friday 17 April.  A report, to be published in April, will help to share best practice, as well as making recommendations to government and civic society. 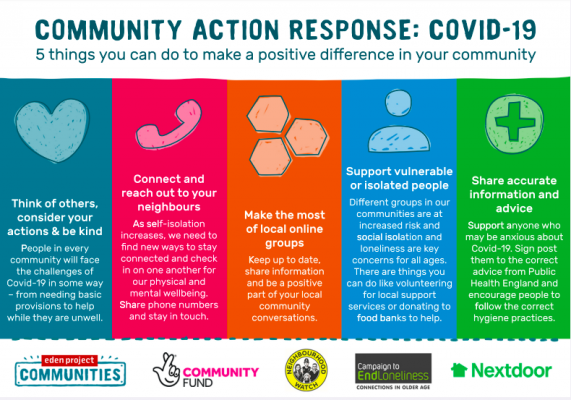 As individuals think more about their neighbours and others in their local community, much of the coordination has been online: thousands of facebook and WhatsApp groups have sprung up, helping people to share information and stay in touch while heeding public health advice to stay indoors unless it is essential. An estimated 2.5 million people are now members of such groups according to the Covid-19 Mutual Aid UK site, a volunteer-run initiative, which is signposting people to local online support groups.

Good, old-fashioned leafleting has also made a comeback – importantly when many more isolated groups may encounter barriers to joining online communities. Putting a note through the door of an elderly neighbour, offering to pick up groceries, may be one of the simplest ways to do your bit – even if the lockdown means you can’t drop by for a cup of tea and a chat. And some traditional centres of community, now neglected as people stay home, have stepped up, particularly in rural areas – with the landlady of the local pub in one Dorset village leafleting older people, according to this BBC report.

Groups that primarily work to connect people face-to-face are adapting their delivery model to the new reality. The Cares Family, for instance, helps combat isolation by bringing together groups of young professionals and their older neighbours for social events, breaking down intergenerational barriers. That face-to-face contact has obviously had to be put on hold. So they’ve having to adopt new and old ways of keeping up that contact – sometimes online but also by phone and by post. They’re now crowdfunding to mobilise more young people to get involved.

Older people are not the only ones who can suffer from isolation. It must be frightening to be experiencing this crisis if you are recently arrived in the UK and speak little English, meaning you can’t fully understand the public health advice. Social distancing has spelled the closure of many ESOL (English for speakers of other languages) classes. Some voluntary sector groups, like the Refugee Employment Network, have offered online resources so people can continue to learn.

Food banks and other community services that rely on donations from shoppers, or from supermarkets who give them excess food that would otherwise go to waste, have been impacted as stockpilers strip the supermarket shelves. Some groups providing help – like Bearded Broz in the West Midlands, who run the Salma food bank and deliver food to street homeless people – are also facing shortages of volunteers as people self-isolate. Yet others report new waves of younger volunteers keen to do their bit, as older volunteers may be forced to heed government advice and stay at home.

Some civil society organisations have also banded together to increase their reach and impact. In Sheffield, for example, Voluntary Action Sheffield is coordinating local efforts from the voluntary sector, signposting people to different support services. On a national level, Eden Project Communities together with partners The National Lottery Community Fund, Nextdoor, Neighbourhood Watch, Campaign to End Loneliness and Eco Attractions Group, have launched ‘Community Action Response‘ to mobilise and coordinate activity.

The Coronavirus will have a long-lasting impact on our economy and our society. It may change the way we work and how we interact with each other. It may also shine a much-needed light on the problem of isolation that affects many people in our society – and perhaps change the way that others offer support to them.

For more information about the APPG on Social Integration’ inquiry, and how to submit evidence, here.