The impact of immigration on local housing supply was raised as a key issue by research groups in two very different parts of Cambridgeshire – Cambridge and March – according to new reports released today from the National Conversation on Immigration, the biggest-ever public consultation on the issue, writes Steve Ballinger.

The EU referendum vote highlighted the divide between Cambridge, where only 26.2% voted Leave last year and March, in the UK’s agricultural heartland of the Fens, where 71.4% of people voted to Leave the EU. The Fens have seen rapid migration from the EU to work on farms and in food processing.

Conversations reflected the different types of migration experienced by these two very different locations, and panellists’ different outlooks. Cambridge panelists talked positively about the cultural diversity that immigration had bought to the city, and many felt that the pressures of immigration were felt less acutely in such a relatively well-off city. They also noted that international students brought many benefits to the UK: most did not see international students in Cambridge as migrants as they assumed they were in the UK for a limited period and then mostly returned to their home countries.

“If you see a foreign young person you think they’re here to study and contribute so it’s much more accepted” (Citizens’ panel participant, Cambridge).

The March panel expressed major concerns about the impact of low-skilled EU migration into the area, particularly on housing, neighbourhoods, the NHS and school places. While most panel members acknowledged the need for low-skilled migration for the local economy, and could cite personal examples of friends or colleagues who had migrated to the town from overseas, overall the group highlighted negative impacts of the rapid increase to immigration to the area and said they wanted numbers reduced.

“Yes we do need the lower skilled workers… however do we need quite so many… higher skills definitely need them… however it is that influx from the lower… that causes issues.”

Yet both groups raised concerns about housing. In Cambridge this was focused on landlords buying up houses to rent out, mostly to students but also to migrant workers, and the impact on prices for young families who want to get on the property ladder. In March, poorly regulated private rental accommodation is a major issue of tension, with the large number of rental properties under multiple occupancy, mainly to migrant workers, affecting the desirability of neighbourhoods.

“You’ve got one house or a flat, but with ten times the rubbish outside and six times the number of cars” (stakeholder panel member, March)

Cambridge and March are two of 24 towns and cities across the UK that have so far been part of the National Conversation on Immigration, which will visit a total of 60 locations by spring next year. People in the area are invited to have their say in an online survey at www.nationalconversation.org.uk and national opinion polling will also form part of a final report in 2018. The findings of the National Conversation feed into the Immigration Inquiry run by the House of Commons Home Affairs Committee, providing an opportunity for members of the public to have their say on immigration policy after Brexit in a way that will be heard by decision-makers. Two research groups were held in both Cambridge and March: a citizens’ panel made up of members of the public and a stakeholders meeting including representatives from local government, business and civil society organisations.

The March panel also raised issues with integration, particularly in nearby Wisbech where it was felt there were real tensions. Panelists praised migrant families who were making an effort to ‘join in’, while noting that many migrants lived parallel lives to their neighbours. Getting more people to learn and speak English was seen as a key solution. 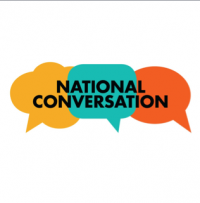 Made possible by funds raised by the public in memory of Jo Cox MP after her tragic murder last year, the National Conversation on Immigration is coordinated by independent thinktank British Future and anti-prejudice campaigners HOPE Not Hate and takes place in a different town each week, in every region and nation of the UK. As well as the citizens’ panel, the organisers meet local organisations, councillors and business leaders in each location to hear their views.