When Prince Harry marries Meghan Markle on 19 May, Britain will welcome its first mixed-race princess – yet amid all the wedding celebrations, Meghan’s ethnic background is something that most Britons will barely notice.

Turn the clock back 50, perhaps just 20 years, and this marriage could be said to cross many of the red lines that might have stopped it happening. Yet the country has welcomed Meghan – also an American, a TV actress and a divorcee – into a royal family that has, slowly, kept pace with the changes that Britain has seen in Prince Harry’s lifetime.

Survation polling for British Future finds that eight in ten Britons won’t bat an eyelid when Harry and Meghan marry on the 19th of May. While 22% think it’s an actively positive thing that someone of mixed race is joining the royal family, a further 57% say that Meghan’s ethnic background just doesn’t matter.

Mixed race relationships are increasingly the ‘new normal’ in Britain. Two-thirds (66%) of us agree that these days, people don’t really notice when they see a mixed race couple in public.

For ethnic minority Britons, however, this royal match does carry a little more meaning. 38% of non-white respondents to our survey think it’s good that someone of mixed race is joining the royal family, with a further 46% saying it doesn’t matter. That feeling is strongest among the youngest minority citizens, with 44% of 18-24 year olds cheering for Meghan as a positive symbol of modern, multi-ethnic Britain.

“It represents a real change in the messaging to young people growing up in Britain and that idea that blackness and Britishness are mutually exclusive.

“I think for me when I was younger that would have made a huge difference to me psychologically in my sense of legitimacy and confidence that this is my country.”

A small minority won’t be joining in the royal celebrations, however. 12% of people feel that it’s bad that someone of mixed race is joining the royal family. While their profile suggests that some may be motivated more by republicanism than by prejudice, others may share the sentiments of Jo Marney, former girlfriend of ex-UKIP leader Henry Bolton, who was criticized for sending racist messages about Meghan Markle.

While the vast majority of us agree that there’s no place for prejudice in Britain, it’s important to remember that racism hasn’t gone away: indeed, the Football Lads Alliance, who claim to oppose racism but have platformed far-right speakers, will demonstrate in Manchester on the same day as the wedding (as will a much larger group of anti-racist counter-demonstrators). That their event also clashes with the FA Cup final rather undermines their claim to be football fans. While we celebrate the royal wedding, and the progress that Britain has made on attitudes to race and integration in Prince Harry’s lifetime, this toxic minority serves as a reminder against complacency – and that we must stand up to racism and prejudice whenever we see it.

Yet this group remains a small minority and one that is shrinking over the generations. Most of us will simply be happy for the royal couple – and would feel the same if it was our own son or daughter marrying someone of a different race or faith. Three-quarters (75%) of Britons would be comfortable if their child or grandchild married or had a serious relationship with someone from a different race or ethnicity to their own. 70% would look similarly positively on a marriage or relationship to someone of a different faith. 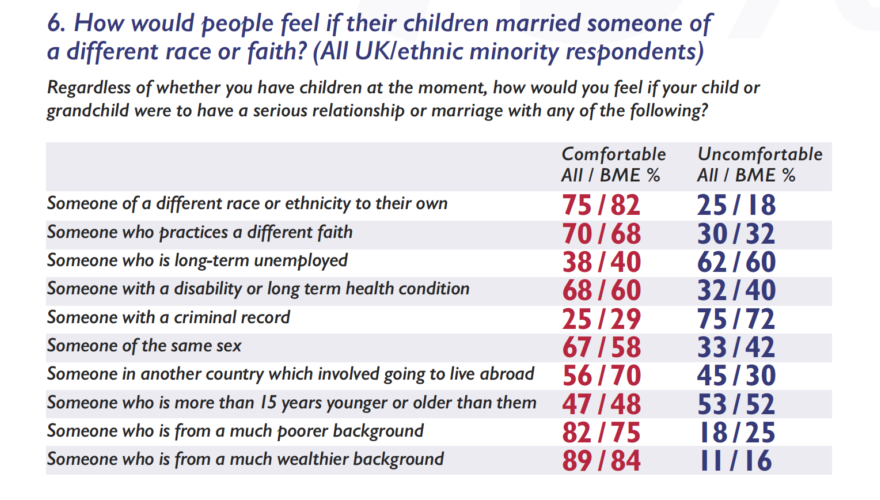 Ethnic minority Britons feel the same, with 82% comfortable with mixed-race relationships and 68% happy for their child or grandchild to marry or have a serious relationship with someone of another faith.

18-24 year olds are more positive still about mixed-race relationships: 86% would be comfortable for their child to marry someone of a different race or ethnicity. That’s considerably more than the 64% of those aged 65+ who say the same. Yet when we spoke to citizens’ panels of older people in the West Midlands as part of this research, we were struck by how many of them had moved on from the attitudes of their parents. They were told not to mix with the new people who looked different, – “My dad used to say to me, don’t you ever go with a black man,” one woman told us in Dudley – but they mixed all the same.

Younger Britons have grown up in multi-ethnic, multi-faith Britain and for them, our diversity is just who we are. Older Britons have watched our society changing over the years and, for some, the pace of change has felt rather fast. One might expect older Britons, then, to be more reticent about someone of mixed race joining the royal family – yet 79% say it’s either positive, or doesn’t matter. Generational difference between young and old was one of the strongest themes emerging from our research on attitudes to race and integration – yet come 19 May, the royal wedding may just bring them together.

A royal marriage won’t, of course, transform social attitudes towards race in Britain. Nor is it going to fix the challenges revealed by the government’s race disparity audit. What the Monarchy can do is play a role in helping to ratify some of the social changes that have already happened. Symbolism is important in shaping how we see our society and national identity – and our constitutional monarchy is one of Britain’s most prominent symbols.

As Britain has changed, our monarchy has, slowly, changed too. TV shows like Victoria and The Crown have allowed us to watch those gradual shifts on fast-forward. They have also shone a light on the monarchy’s own history of immigration and integration: from the Windsors’ German roots to the Queen’s choice of her dashing migrant prince Phillip. Seven decades on, Britain will greet its first mixed- race Princess with a shrug of the shoulders and much waving of flags across Windsor. A multi-ethnic Britain was bound to have a multi-ethnic Monarchy eventually.  On 19 May we will celebrate Harry and Meghan’s wedding as we notice both how Britain has changed, and how our changing Britain is still Britain, all the same.

Opinion polling was by Survation for British Future’s report Many rivers crossed: Britain’s attitudes to race and integration 50 years since ‘Rivers of blood’, published April 2018