On Saturday 19th October British Future and IPPR are co-hosting a “Festival of Englishness” to address a question which is becoming increasingly central to the Britain’s national conversation: who defines themselves as English and what does it mean when they do? Featuring top political thinkers and figures from English culture, sport and comedy, “England, my England: A festival of Englishness” will examine exactly what English identity means today and what its implications are for people in this country. 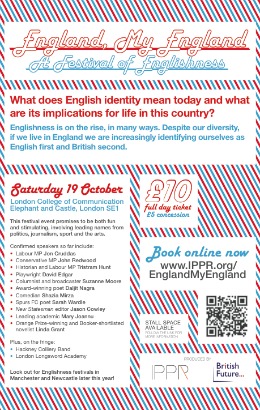 It’s an important topic, as IPPR’s Tim Finch explains when he says that “the English are certainly stirring,” as can be seen by statistics such as nearly three in four of those in England believing St George’s Day should be a national holiday and 62% expressing pride when seeing the St George’s cross fly.

An increasing number of people in England identify themselves as English first and British second and the question of Englishness is being discussed more up and down the country. Some people are still unsure about whether they should have the conversation at all. Until now. “England, my England: A Festival of Englishness” will address head-on what the rise of English identity means for our culture and society, as well as our politics. Should we worry about it or should we embrace it?

There are a host of different ways in which people identify with and celebrate their Englishness. The festival will explore a variety of topics, ranging from politics, culture and food to sport, humour and history. Some highlights will include head of Labour’s policy review Jon Cruddas in conversation with top Conservative thinker and MP John Redwood on the question of Englishness. Also not to be missed will be a talk by prominent sports journalists Mihir Bose (BBC, Evening Standard), Anthony Clavane (Daily Mirror) and Spurs own Poet Sarah Wardle entitled “A Question of English Sport.”

For the culture vultures, RSC and National Theatre playwright David Edgar will be in discussion, as will Vanessa Whitburn, editor of Radio 4’s The Archers from 1991 to 2013 and Orange Prize-winning and Booker-shortlisted novelist Linda Gran. Meanwhile, comedians Shazia Mirza, Matt Forde and Tim Kennington will crack you up in “You’re having a laugh: humour and the English.”

All the while people can enjoy classic English food and beer, while listening to live performances from the Hackney Colliery band. For fans of Ye Olde England, there will even be a demonstration of swordsmanship from the London Longsword Academy.

So come along and decide for yourself whether you are English or British, both or neither.

“England, my England: A festival of Englishness” will take place on Saturday 19th October between 10:30 am and 5:30 pm at the London College of Communication, London SE1 . Tickets are £10 (£5 concessions). Click here for more information and to buy tickets.