7/7 survivor and faith leaders walk together

Faith leaders from the Muslim, Jewish and Christian faiths were joined today by 7/7 survivor Gill Hicks to walk from Kings Cross to Tavistock Square in remembrance of those who lost their lives ten years ago. They are supporting the #WalkTogether initiative, which calls on people all over Britain to get off the bus, train or tube one stop early on 7 July 2015 and walk the last stop, in a quiet moment of remembrance and unity.

It is inspired by the scenes on London’s streets on 7 July 2005, when public transport closed down and thousands walked calmly home.

They are asking the public to show their support by sharing a picture or message with the #WalkTogether hashtag. 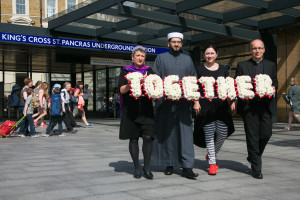 Gill suffered severe and permanent injuries as a result of the 7/7 bombings, losing both legs from just below the knee. After 7/7 Gill decided to dedicate her life to being an advocate for peace and has made it her mission to use her experiences to positive effect. In 2007 she founded the not-for-profit organisation ‘M.A.D. for Peace’. Her projects and initiatives aim to deter anyone from following the path of violent extremism and to build sustainable models for peace. She said:

“My life and those around me changed forever on July 7, 2005.  I believe in the power and brilliance of humanity – my life was saved by strangers, people who never gave up, people who risked their own lives to save mine. To them, I was a precious human life – my rescue wasn’t dependent on my faith, my colour, my gender or wealth.

“Walking Together allows us the time and space to talk, to share and to know the ‘other’. Our unity can offer the strength to not only deter anyone from following the path of violent extremism, but to also build a sustainable peace.”

The Revd Bertrand Olivier, Vicar of the church of All Hallows by the Tower, had been inducted into his post only days before July 7th 2005. He helped provide 24/7 support at St Botolph’s Aldgate for the police and emergency services, sourcing food and refreshments from local shops and helping to maintain cordons so emergency workers could rest and refresh themselves. He said:

working together as neighbours with hope, tolerance and care to ensure that extremists who seek to drive a wedge between us do not succeed.”

Imam Qari Asim said:
“This is an important moment for us all in Britain – a time to mourn and remember, but also to think about the society we are and that we want to be.

“It’s been a difficult decade and we still face many problems. For me as a Muslim, it’s important to challenge these vile people who claim to be acting in the name of my faith when they kill innocent men and women. For us all, it’s important to stand together in the face of those who want to divide us.

“The terrorists didn’t defeat us on 7/7. Despite the challenges we face, we have stayed together and by doing that, we continue to show we are stronger than they are. WalkTogether is a symbolic act but a hugely significant one – I hope people will join us on 7 July.”

“The attacks on London were an attack on all of us – black and white, rich and poor, different faiths and none.  That’s why we’ve decided to join hands today and call on people all over Britain to walk side by side in a moment of remembrance and of unity on 7/7. I’m proud to walk together with my friends here today and I hope thousands of people across Britain will do the same on Tuesday. That would be a very powerful statement about who we are as a country.”

Find out more at www.bit.ly/walktogether