“Everyone forgets to talk to us about politics”

On the most southerly leg of the Voice of a Generation tour Helen reports on her time spent with young people in Devonport, the heart of the Plymouth docklands.

“Everyone forgets to talk to us about politics, outside of the Westminster bubble” says Sarah Staples, an 18 year old A-Level student in Plymouth.

“I feel like often, politicians only talk to young people as a token gesture”.

Sarah is also a member of the Youth Parliament, and is passionate about politics – but specifically the ones which affect the people around her. 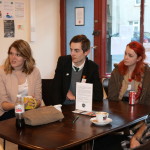 “Try and tell me young people don’t care about politics”.

This opinion sums up the majority of the views put forward during my visit.

Meeting a group of potential first-time voters in DevonportLive, a social enterprise cafe and venue in Devonport, I found there was a pretty even split between those who engage in politics in a traditional way – like Sarah and Luke who were both members of the youth parliament for Plymouth, and Milo, 17, who does Politics as an A-Level subject – and those who don’t.

Katie for example, who is studying business and is an apprentice at DevonportLive, claimed to know nothing about politics – although was 100% involved in current affairs, knows what the issues are, and knows what needs changing.

Regardless of Everyone thought that the conversation about politics needs to be opened up more.

Colline Richards, a voluntary youth worker and mum, says: “I never knew nothing about politics, I don’t know who I should vote for or anything.

Both Luke and Johnny want to open up the politics conversation for the younger generation, and make politics more inclusive for everyone.

A strong reoccurring theme for all the groups we have spoken to is the lack of political education. This reflects the Voice of a Generation polling results, which reported that 62% of first time voters aged 18-22 think that there needs to be more compulsory education for politics.

All of the group supported Labour’s proposal for votes at 16, but felt that lessons on the basics of our system were necessary.

Sarah says: “If you can teach religious education, why can’t you teach politics? A good teacher should be informative, but non partisan.”

The group also had strong opinions on university and tuition fees, following the announcement on Friday that if Labour get into power after the 2015 General Election , they will cut tuition fees to £6,000 from the current £9,000. Although they felt the proposal is helpful at this stage, most of the young people we spoke to felt that colleges use university as a box ticking exercise and try to get as many students to apply as possible – even when it isn’t really appropriate for the student.

Adam, a youth worker, says: “Schools push for university without it being right sometimes – I found an apprenticeship in youth work, and I’m glad I did”.

Opinion on whether Labour announcing their cuts to student fees or David Cameron’s proposal to provide 200,000 starter homes is the best policy, is also divided.

Tom thought that the proposal to cut student fees will affect more young people: “It’s more important for me and for a lot of the young people I represent. University affects a majority of people.”

Katie, however, thinks that the housing proposal is vital for those trying to fly the nest from their family home: “The homes proposal is more important than the student fees proposal – as someone who has tried to move out before and couldn’t because of the cost.” 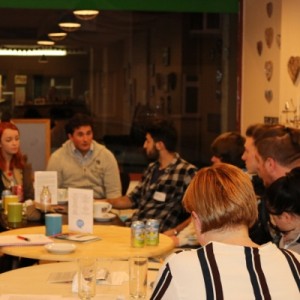 They also felt that the drive for more apprenticeships is a good thing, and that there should be other ways into higher qualifications aside from just going to university.

Like elsewhere we have visited, there is a strong sense that young people aren’t being paid attention to by politics in the UK today. And again, the suggestion that young people aren’t engaged in politics doesn’t stand up against the reality when we speak with groups like the potential first-time voters of Plymouth. Yes, engagement with traditional Westminster politics might be low – but that is because young voters don’t find it accessible.

But without exception, every young person we spoke to has a comprehensive view on the issues around them and the issues that affect them – whether they be members of the youth parliament, or politics students, or those who class themselves as “not knowing anything” about politics.

Everyone was clued up, engaged and wanted to be involved – it’s just that Westminster doesn’t discuss the issues they feel need to be talked about.

This article first appeared on The Mirror online here. It has been modified for British Future.

Helen Whitehouse is a 19 year old trainee reporter for the Daily Mirror, reporting on issues facing the youngest members of the electorate ahead of the May 2015 General Election.