What Next for Labour’s Agenda on Race? 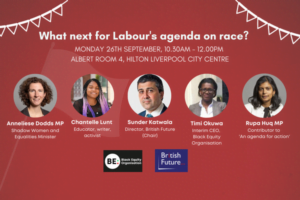 The Labour Party will be expected to have a substantive agenda for race equality at the next General Election, but it also faces challenges about its own approach to race, representation and internal party culture if it is to renew its historically strong relationships with Black British and ethnic minority voters.

The event, ‘What Next for Labour’s Agenda on Race?’ was co-hosted by the think-tank British Future and Black Equity Organisation, a new independent Black civil rights organisation, making its debut on the party conference fringe. The panel featured Anneliese Dodds (Shadow Secretary of State for Women and Equalities), Chantelle Lunt (educator, writer and Director of Merseyside Alliance for Racial Equality), Rupa Huq (MP for Ealing Central and Acton) and Timi Okuwa (Interim CEO of Black equity Organisation).

“We’ve got to start from a view that there is systemic inequality and we do need systemic change“, said Anneliese Dodds. Dodds echoed the call in the recent British Future and Bright Blue report, An Agenda for Action, for “specific actionable ideas” on racial equality, adding these were needed with urgency in Labour. The party had several policy commitments – including protecting equality impact assessments, mandatory ethnic pay gap reporting, and implementing in full the recommendations of the Lammy Review on criminal justice – but this agenda would be deepened around the Party’s commitment to a flagship Race Equality Act. “We recognise the need for legislative as well as societal change“, said Dodds. Baroness Doreen Lawrence was now heading a task force on the development of this agenda.

“What we want to do is generational“, said Timi Okuwa, interim director of Black Equity Organisation, presenting some of the key findings from BEO’s new research, the largest ever study of Black British attitudes. Okuwa shared polling from their new State of Black Britain report. 65% of black people say that they’ve been discriminated against by healthcare professionals because of their ethnicity, while 59% say that they or someone close to them has experienced stop and search or wrongful arrest.

Rupa Huq reflected that the debate about race in Britain could swing from day to day in response to events – from the positive images of the Commonwealth Games this summer to community tensions in Leicester. “Some of the narratives which have been pushed in response to Leicester have been that diversity has failed – and that is toxic“. Huq warned that the idea that a majority of Black and Asian voters would consistently remain faithful to Labour was complacent. Beyond challenges from the Conservatives, progressive voters would consider the Greens and Liberal Democrats should Labour take ethnic minority Britons for granted, without taking meaningful action on racial equality and diversifying political representation.

Chantelle Lunt said that Black people remained enormously engaged with political issues, but there had been a generational shift in whether “big P politics” and the Labour Party were the best use of their efforts. “The Forde report didn’t get anywhere near the media attention it needed.” “How can we fix the world if your own house is not in order?“, she asked. 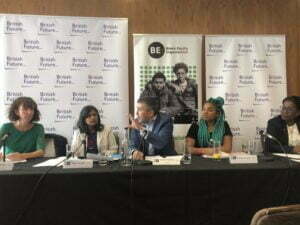 Sunder Katwala of British Future, chairing the event, noted that about one-fifth of the Labour vote and about one-fifth of Labour MPs were from ethnic minority backgrounds, but that there was a pattern of much less ethnic diversity at most other levels of the party, including special advisers and party staffers to the party membership.

Dodds said that the Labour Party leadership recognised the challenges to party organisation and culture set out in the recent Forde Report and was making changes to respond. The party had been too slow to consistently collect data on ethnicity in the party, which was not happening. There was now a ban on informal recruitment for jobs, which Dodds said was an overdue change. “If you don’t have open recruitment for jobs, you will keep recruiting from your own networks and in your own image – and so that has tended to be a white, middle-class image.”

Councillors and party members speaking from the floor said that race equality was about substantive policy, but many emphasised that the Labour Party needed to ask itself why the party was not matching the levels of ethnic diversity in leadership roles in the Conservative Cabinet. Councillor Marianna Masters from Streatham said more focus was needed on pathways for fairness and meaningful inclusion. Many participants expressed the view that there was still discrimination in the Labour Party – and several specific examples were given of potential councillors being advised to seek to stand in minority-majority wards. “There are plenty of white Labour councillors – the role of Black people is not only to represent highly diverse communities; we can represent everybody“, said one participant from the floor.

Different views were expressed about the party’s use of the Union Jack. Chantelle Lunt said that this could be alienating for Black Britons, and Rupa Huq said that constituents had expressed a range of views to her about this, because of its historic associations with the far right.

Speaking from the floor, Councillor Sagal Abdi-Wale from Camden said that the party did need to engage with national symbols, yet it should also engage with mixed views and perceptions about its meaning to different generations. More conversation that was needed about the inclusive vision of identity that the flag could represent for Labour.

Lunt responded that she was happy to “wrap herself in the flag for the Olympics” but that it could have a dangerous and threatening meaning in other contexts.

During the question and answer section of the fringe, an audience member asked the panel “what is black about Kwasi Kwarteng’s economics?” In response Huq had that said “superficially he is a black man”, before going on to say that his private education gave him more in common with other privately educated Conservatives.

Sunder Katwala, chairing the event, said that the Left needed to challenge people on their political ideas, and must not make the argument that black people could not be Conservatives.  “Kwasi Kwarteng being a Conservative doesn’t make him not black. I think Labour has to be very careful about this”. This was applauded by the audience.

Katwala noted that around a quarter of black and Asian people in Britain were Conservative-leaning, while over half were left-leaning, he said, so there was no single political view based on people’s race. As a Conservative MP, Kwarteng did not claim to be in parliament as a representative of the black community.

Chantelle Lunt also said that it was important to recognise that Kwateng is a black man and a Conservative. She said that the right approach would be to challenge him over his economic policy and his budget. “And then if he faces abuse because he is racialised as a black man, we would defend him from that”

The Labour Party leadership suspended Huq pending investigation over her comments at the fringe meeting. Rupa Huq said that she had contacted Kwasi Kwarteng to offer her sincere and heartfelt apologies for her ill-judged comments.