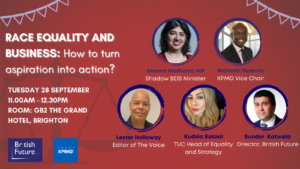 When it comes to race equality in the workplace, action speaks much louder than words. A lively British Future event at the Labour Party conference, held in partnership with KPMG, debated what needs to be done to remove the barriers that prevent black and ethnic minority employees from achieving their potential.

Race equality and business: how to turn aspiration into action?

In the aftermath of George Floyd’s murder, we heard much from business about their commitment to ending race inequality. As Seema Malhotra MP noted in her opening words, responding to consumer pressure, high profile businesses including Nike and Adidas made financial pledges to tackle racism and inequality. Others, in the voluntary sector as well as business, sprang into action to increase the diversity of their boards.

But it’s at the sharp end, in the workplace, that structural racism has been especially slow to shift and where investment in change urgently needs to happen. What then, Seema Malhotra MP asked the event, “do we expect our organisations to do differently and better? What are the challenges in the workplace?”

Fortunately, the route to achieving real change has already been mapped out – it just hasn’t been followed. As Seema Malhotra noted, the McGregor-Smith review on race in the workplace included a series of steps for adoption by employers and policy-makers. These include ethnic pay-gap reporting, data by salary band and promotion rates. She welcomed the Party’s commitment to a new Race Equality Act announced by the Shadow Minister for Women and Equalities Annaliese Dodds, adding that this needs to include training and pay reporting.

Lester Holloway, Editor of The Voice, also pointed out that being self-employed is no escape from structural racism and that new legislation would need to ensure it removes barriers for black businesses, including discriminatory financial loan practices and procurement that sidelines SMEs with community roots.

Equality and diversity is good for business

Richard Iferenta, Vice Chair at KPMG, pointed out that the focus on profit is by no means in tension with achieving race equality: “The evidence,” he said, ”is that where you have diversity at the top, a business is more profitable”. He added that senior, visible diversity can attract top young talent: “The reality is that when people are applying for jobs, they look at a company’s profile and think ‘is this the sort of business I want to work for?’”

Black employees are speaking up and need to be heard

Iferenta also remarked on the rapid pace of change in businesses in the two years since George Floyd’s death and the prominence of the Black Lives Matter (BLM) anti-racism movement. Concerns about policing have broadened out to other areas of justice and equality, with the workplace a key focus for calls for change. As he pointed out: “People are saying they’ve been marginalised, haven’t progressed in their jobs and aren’t reaching leadership roles, and not having any hope that would happen.” Black employees now feel more confident talking about their own experiences and campaigning for structural and systemic racism to be addressed. They can now longer be fobbed off with ‘warm words’.

Workplace politics can be difficult to navigate and employees and their representatives can get distracted by arguments over terminology and blame rather than how to address structural racism. Kudsia Batool pointed out that trade unions, as well as employers, need to be more inclusive: “We need to organise more in jobs that young black men and women are doing and get them to be not just trade union members, but union leaders,” she told the event. Agreeing with her point, Lester Holloway argued for a stronger focus on the intersection between social class and race, and on tackling discrimination and disadvantage rather than engaging in debates fuelled by ‘culture wars’.

Businesses are standing up for change – what should they do?

Members of the audience, as well as panel members, talked of a range of measures to bring about change, including blind CVs and diverse recruitment panels. Kudsia Batool and Richard Iferenta spoke of the risks of unconscious bias, where candidates are rejected because it is felt they might not ‘fit in’. As Seema Malhotra MP noted, since racism can occur at any point, “every stage of the recruitment process needs looking at.”

But recruitment is only part of the picture. Obstacles to career progression based on race can be pernicious and obstinate, embedded in workplace structures as well as attitudes and behaviours. Richard Iferenta pointed out that retention is as important as recruitment, and that black employees whose skills and abilities are not recognised will leave, representing a loss of talent and costs to the business and its reputation.

Since it is so all-embracing, Kudsia Batool from the TUC argued that equality impact assessments are needed to identity all of the dimensions in which black employees experience discrimination and disadvantage. Seema Malhotra MP made the case for performance data to be publicly available: “More should be done to challenge what businesses are doing, and to show what they’re doing”.

The panelists argued that the best way to navigate polarisation around race and identity was to focus on a constructive practical agenda for change.

Conference attendees highlighted that these practical challenges of tackling barriers applied not only to businesses, large and small, but also to local government, civic society, the trade union movement and the Labour party itself. But the evidence base on progress and gaps to inform action was often patchy.

Summing up from the chair, British Future Director Sunder Katwala said that turning aspiration into action should involve calls for policy change from government, but also all institutions taking responsibility for their own contribution to race equality and inclusion. 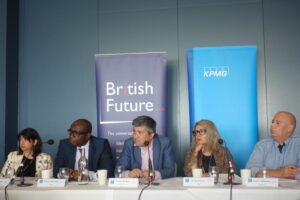