Policing in Modern Britain: What would build trust on race? 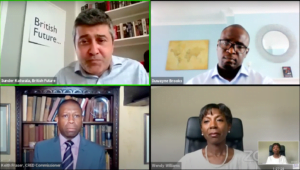 A “once-in-a-lifetime” opportunity to increase the diversity of police forces in England and Wales risks being missed, unless significant action is taken, senior policing experts said at a British Future event yesterday.

“Currently, all police services are significantly less diverse than the communities that they serve,” Keith Fraser, Chair of the Youth Justice Board and one of the Commissioners on Tony Sewell’s recent Commission on Race and Ethnic Disparities (CRED), told the online event ‘Policing in modern Britain: what would build trust on race?’

Wendy Williams, HM Inspector of Constabulary, added more detail. Only 7-8% of police officers are from an ethnic minority background, she said. And in 2020 only 2% of Chief Officers were from ethnic minorities.

Both recognised that the government’s ‘Uplift’ programme, which aims to recruit 20,000 new officers over five years, offers a unique opportunity to increase minority representation in the police force. That opportunity, however, is in danger of being missed.

While Uplift is “well on track” to meet it’s 20,000 target, Wendy Williams said, having already recruited 8,700 people since 2019, just 10% are from an ethnic minority background and only 7-8% are black. There are some improvements in recruitment among the Asian community but there has been “no real movement” in the rate of recruitment of black police, she added – noting that retention and progression of ethnic minority staff within the force needed to improve too.

Keith Fraser agreed. “Operation Uplift is a significant opportunity, that we’re probably not going to get again, to really shift the profile of what policing looks like,” he said. “And I think if we, and the government, don’t grab that, it’s going to be an opportunity missed to make some significant differences to the workforce profile.”

Failing to get this right could have an impact on the police’s ability to do its job, Wendy Williams said. The police “has to have the confidence and the consent of the public – and that’s all the public,” she said. “By having a diverse workforce… that will help the police cut crime.”

“Something significant has to be done,” she added.

The event, chaired by British Future’s Director Sunder Katwala, sought to interrogate the scope and limits of progress to date on race and policing, the recommendations of the Commission on Race and Ethnic Disparities, and what needs to change now.

Police use of ‘stop and search’ powers was also, inevitably, high on the agenda.

Duwayne Brooks made a simple and powerful point about its impact on trust and relationships with ethnic minority communities: “My first interaction with the police should not be a stop and search,” he said.

“If you’re a black person you are nine times more likely to be stopped and searched than if you’re white,” said Wendy Williams.

The priorities for most police forces, she said, were tackling serious violence and organised crime, such as ‘county lines’ and drugs gangs. Most Stop & Search activity, however, relates to drugs possession, not supply. Four out of five searches fail to find anything; and when they do, it is usually drugs rather than knives or guns.

“It is for policing to show how their Stop & Search activity is assisting them in cutting crime,” Williams added. “If they fail to do so then they risk alienating the public.”

Keith Fraser highlighted the CRED recommendation to increase the use of body-warn video cameras to record Stop & Search activity. The panel agreed that video footage could offer more objective evidence in cases where concerns were raised about searches – though as Wendy Williams pointed out, it would require officers to routinely have the cameras switched on, which is currently not always the case.

This issue of transparency and accountability was a key theme of the discussions. Duwayne Brooks suggested that local policing could be much more open with local residents about their operations, what their objectives were, and whether they were successful. Keith Fraser went into more detail about the ‘Community Safeguarding Trusts’ that the CRED report recommends setting up, which would seek to empower local communities to scrutinise and hold police forces to account.

Concluding the event, Sunder Katwala asked the panel what their priorities for change would be.

“I want the government to accept all the recommendations in the report,” said Duwayne Brooks. “We have an opportunity to improve the lives of millions of people.”

Keith Fraser asked the public to “challenge the government to ensure that those recommendations around policing, and wider, in the report are implemented.”

“I would hope to take advantage of this once-in-a-lifetime opportunity,” he added. “If you’re recruiting significant numbers of police officers it’s an opportunity for significant change.”

Wendy Williams challenged both police forces and the public to shift practice and improve scrutiny and accountability. Local communities should “Get involved with the local police force, engage with them, hold them to account,” she said.

For police forces she had a clear message too. “Set a challenging programme of action – and just get on with it.”