It’s Just Not Cricket: 2022 Must Be a Year of Action for Race and Inclusion in Sport 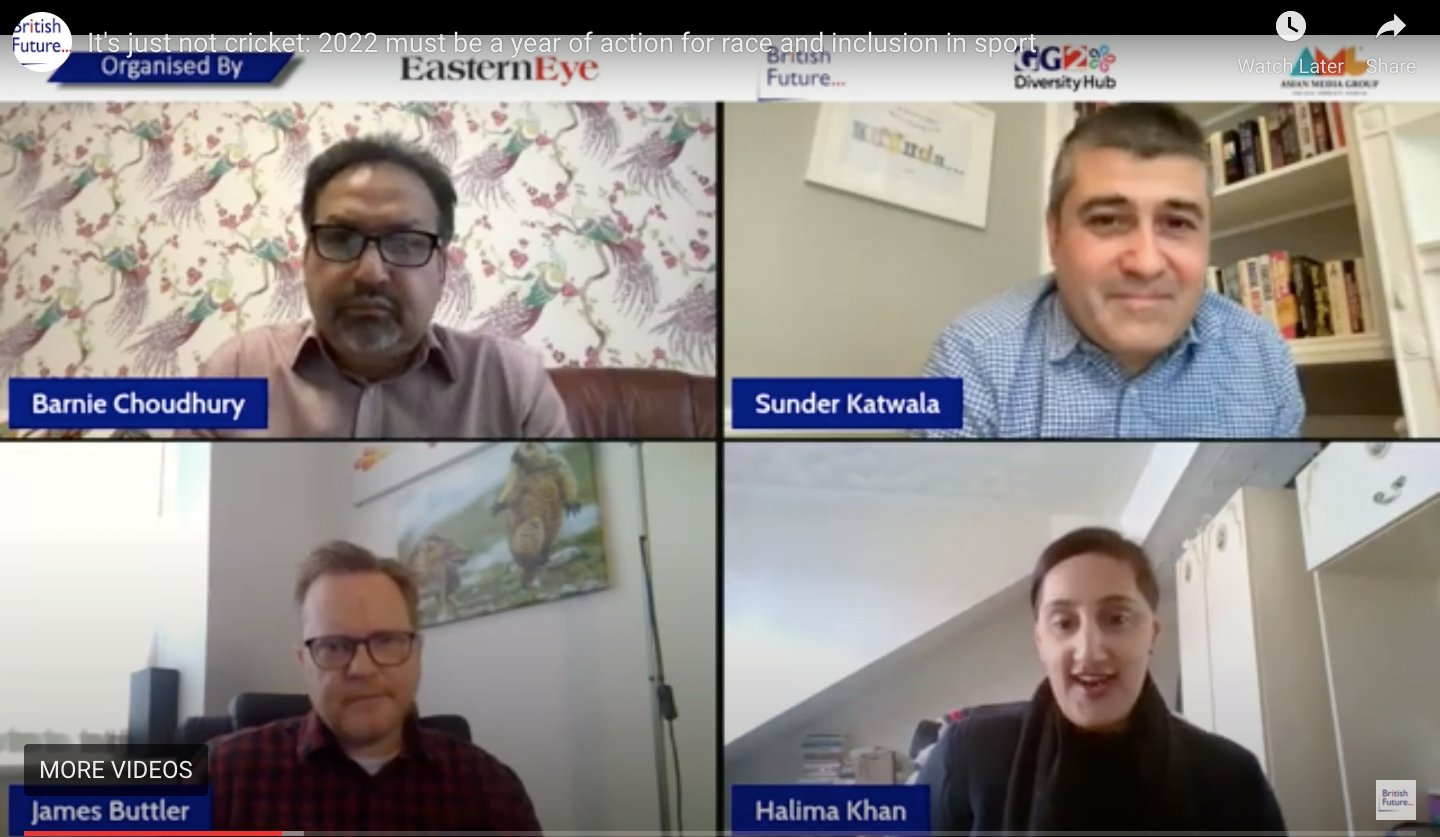 Cricket, and sport in general, ­ has an opportunity to make real change on diversity and inclusion in the wake of the Azeem Rafiq racism scandal, an online event heard today. But panellists insisted that there will need to be more engagement with people from all backgrounds – lasting beyond this current period of intense media scrutiny – to secure lasting change.

The event, ‘It’s Just Not Cricket – Why 2022 Must Be a Year of Action for Race and Inclusion in Sport’, was hosted jointly by Eastern Eye newspaper and British Future. Panelists Halima Khan of Opening Boundaries, James Buttler of the Cricket Badger podcast and Sunder Katwala of British Future were chaired by Barnie Choudhary, Eastern Eye’s Editor-at-large. You can watch a video of their discussion below.

Halima Khan spoke about growing up in Bradford, and how the sports field was one of the few places where she had a chance to mix with women from different backgrounds to her own. “I love cricket: I’ve played it, watched it, coached it,” she said. But now Yorkshire County Cricket Club and the English Cricket Board had lost any trust that the local Asian community had in them. That is a missed opportunity and one that they will need to work hard to address, she said – while stressing that it is still possible to rebuild bridges.

“I’m a Yorkshire woman,” she said. “I want to be able to go to that club and say ‘I’m proud to come to this club, it is a part of me, it’s a part of the history that I’m involved in’.”

James Buttler, who has followed Azeem Rafiq’s story closely over the last two years, echoed that sentiment. There is an opportunity now, he said, for Yorkshire to draw a line, be honest and open about past mistakes and to use this watershed moment as a chance to talk to people from different backgrounds and make it their club too.

But this is a wider problem, he said. “This isn’t just a Yorkshire problem. Yorkshire are very much in the headlines at the moment because of the way they mismanaged Azeem’s allegations. But there are whistleblowing hotlines across the country and there are people coming forward from all 18 counties and giving their experiences of racism in the past,” said James.

Speaking out is not easy, however, and the treatment of Azeem Rafiq has certainly deterred others. He told the event: “I’ve spoken to a lot of people over the last 18 months, since I interviewed Azeem, who’ve said that ‘I’ve got issues but I daren’t come forward because it might affect my future employment opportunities, it might affect my ability to go into coaching, I might lose that contract’.”

Halima agreed that supporting those who stand up to racism was an important way to make the playing field or dressing room feel inclusive. “It’s been too easy to stay silent,” she said. “But when someone speaks up for me in that situation, I feel included in that environment.”

Sunder broadened the focus to sport in general and its role in our national conversations about topics than can be difficult and divisive. “Sport is so important to race, identity and social connection in our country,” he said. “Sport drives that conversation because it’s something we’re all interested in that brings us together – when it works.”

Sunder had spoken earlier to the Press Association about his own, recent experience of online racism, contrasting it with the positive changes he had witnessed in the football stadium and wider society over the last 30 years. “I’m now in my 40s and I’ve seen change in our society for the better, across the generations,” he said. “But I’ve also lost that change in the last three years personally because I’m back to getting more racism in my life every day than I have for the last thirty years. Because I talk about race publicly I’m one click away from any bigot… People can harass me and if Twitter and the police don’t do anything about that – and they don’t – then I’m in a worse position.”

So what do we do now? While the panel felt it was important to hold those responsible to account, and to support those with the courage to speak out, they also wanted a constructive and positive agenda for change.

“We’ve got to find a way of hearing the experiences that people have had, doing something with them and recording them, and working out how to forgive, move on, make people part of the solution,” said Sunder. “We haven’t offered the members of Yorkshire County Cricket Club the role that we want them to play in being part of the future – we’ve just told them that they should’ve been more alert over the last 15 years.”

James was keen to engage those who had acted wrongly but also to give them an opportunity to change. “You obviously need to take responsibility and be accountable if you’ve done something racist,” he said. “But we need to have some way where you can encourage that person to jump the fence and come over to the other side.”

He was also keen to maintain focus on this issue, a point echoed by Halima, for whom a long-term approach, lasting well beyond the current focus on cricket and on Yorkshire, is key. “Tackling inequalities isn’t something you start in March and complete in April – it’s lifelong,” she said. “We have to take the opportunity that has come out of this, and try to change the face of cricket, and sport more generally, on inclusion.”