Should Labour call off the culture wars? Conference fringe report 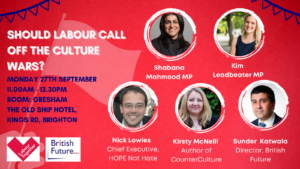 Should Labour call off the culture wars?

The best way to win an argument isn’t by squabbling over who started it. And as panellists at British Future’s Labour Party fringe meeting agreed, the only winners in the culture wars are those who seek to intensify social divisions on lines including race and gender. But calling them off isn’t easy – and cannot mean failing to respond to disinformation and hate speech, which has become part of online life.

Culture wars impact directly on people’s real lives: as Shabana Mahmood MP pointed out, they can leave ethnic minorities in fear for their safety. As both MPs on the panel agreed, politicians should also want to do politics better.

What’s the role of the media?

In a pre-recorded message for the event, Kim Leadbeater MP, who was isolating due to Covid, noted that the culture wars are played our more in the media than in everyday life. Panellists agreed that social media polarises the debate and that the worst excesses of social media need to be curtailed., Finding that balance without people feeling shut down, however, is hard to achieve.

Labour needs to navigate the culture wars, not ignore or inflame them

The issues fought over in the culture wars are not invented, though some stories doing the social media rounds are – for example that Black Lives Matter supporters wanted to cancel the Last Night of the Proms. As Sunder Katwala and Nick Lowles agreed, politics inevitably includes issues of culture and identity, and always has: from Enoch Powell’s intentionally inflamatory speech in the 1960s to the gay rights campaigns of the 1980s and onwards. As Nick Lowles noted, “Labour can’t dodge culture wars, it needs to navigate them”.

Culture wars are also the prism through which people’s fears are expressed, and these are often about loss and change, as in Far-Right campaigns against immigration and asylum. However, as Sunder Katwala pointed out, while change is too fast for some, it’s too slow for others. In either case, the basis for people’s fears and frustrations can’t be ignored, or those with intentions of making gains and inflaming hatred will step in. This danger is ever-present, with Nick Lowles giving the example of a growing anti-lockdown movement with wide demographic appeal and a conspiratorial agenda.

What can we do to call off the culture wars?

As Shabana Mahmood pointed out, “While we might want to call off the culture wars, we don’t have the option”. What we all have, however, is the ability to debate better. She talked of the importance of listening, and of having different conversations on others’ terms. As Nick Lowles said, “We like to think it’s the Right, but the Left aren’t good at listening to others’ points of view and having empathy”. At the same time, organisations need to defend others under attack, particularly those who lack the capacity or expertise to stand up for themselves. And Shabana Mahmood also warned against downplaying fundamental disagreements: “We have to also acknowledge the things that make us different as well. Labour can’t skate over the differences”.

In her video contribution Kim Leadbeater MP talked of the need for politicians to actively respect differences in views and work on a cross-party basis when it makes sense to do so. She also spoke of the importance of community opportunities to help people meet others from different backgrounds in real life, rather than online. The tone of debate is also important, with Shabana Mahmood highlighting the importance of engaging with adversaries in good faith. Panellists also agreed on the need for a politics that is bridge-building and about persuading, finding common ground and accommodating others’ views – rather than always seeking to prove that the other side is wrong. 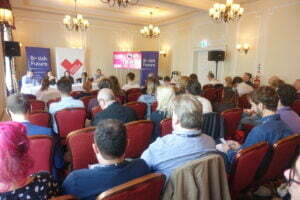