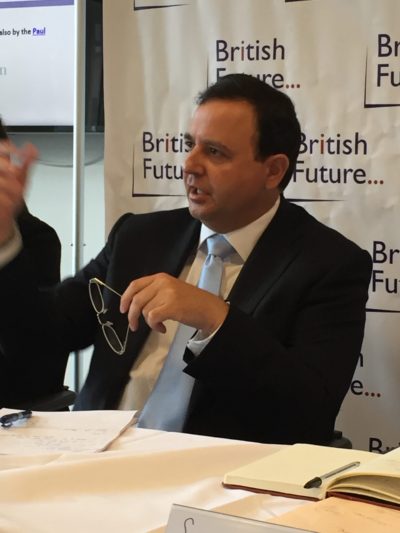 The Government should do more to encourage the take-up of citizenship, according to the chair of a new cross-party inquiry on citizenship policy, launched this week.

Speaking at the launch of the citizenship inquiry at British Future, Alberto Costa, Conservative MP for South Leicestershire, said:

“I want to see the British Government encourage the take-up of citizenship, for those that want to come here, for those that are here from a different country, who want to contribute and be part of our great society.

“And that’s why I pushed earlier this year, at least starting with EU nationals but I’m quite happy to see it rolled out, of waiving the fee or reducing it.”

“To me today being British isn’t about carrying a passport… it is respect for the rule of law that has developed over centuries. We are a beacon of light to the world on democracy, on human rights and on accepting the rights of minorities and those that come into the UK to join us.”

The panel also heard from Ilse Mogensen of The3million, who described herself as a ‘newly-minted’ British citizen, having gone through the citizenship process quite recently.  She was critical of how little information EU citizens are given, in the EU Settlement Scheme process, about pathways to citizenship – though she also added that citizenship is no panacea for EU citizens and may not appeal to all of them.

The audience also watched a new short film from the first input to the inquiry, a deliberative event bringing together ‘new citizens’ and others who were born British, to discuss the meaning and content of citizenship policy.

Author Robert Winder offered a broad sweep of the history of citizenship noting that it is, by its very nature, exclusive. In the 20th century, he said, the whole push on citizenship has been to restrict it. And while there need to be rules, the challenge is ensuring that they are fair.

Jill Rutter of British Future, who will act as Secretary to the inquiry, said that it will also look at good practice across the UK and around the world. In Durham, she said, registrars have involved local primary school children who came to the ceremony, learned about the process and made a presentation about the history of Durham.

“In Norway,” she added, “where the cost of citizenship is lower, it’s a tougher process in terms of eligibility but you have the choice of attending a course with Norwegian teenagers, and passing the Norwegian Social Studies Test as your citizenship test, so it’s common knowledge for 17-year-olds about to attain the age of majority and new citizens.”

The inquiry has issued an open call for evidence, with submissions closing on 18 October.