Inquiry: EU nationals living in UK should be given permanent residence 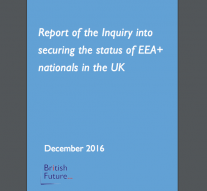 EU nationals already living in the UK at the point when Article 50 is triggered should be guaranteed the right to settle here permanently, according to the new report of an independent Inquiry into the status of EU nationals in the UK after Brexit, convened by British Future.

The Inquiry’s report calls on the Government to make a clear public commitment that the 2.8 million Europeans in the UK can stay, and should be offered Permanent Residence with the same health, social and educational rights as British citizens.

After Article 50 is triggered, EU citizens could still move to the UK under free movement rules until we leave the EU – but their post-Brexit status would be dependent on whatever future arrangements the UK negotiates with the EU.

The Inquiry panel included voices from Leave and Remain, different political parties and from business and trade unions and was chaired by Gisela Stuart MP, former Chair of the Vote Leave campaign. Its remit was to examine how the Government can protect the rights of the 3 million EU citizens living in the UK after Brexit and to make practical recommendations as to how to do this, starting from the premise that this is the right thing to do.

The Inquiry’s report also recommends major changes to the application process for Permanent Residence which, it says, is onerous for the applicant and risks overwhelming the Home Office with one of the biggest single administrative tasks it has ever undertaken. At the 2015 rate of processing it would take 150 years to process the applications of all EU nationals currently in the UK, the report estimates.

For the two-thirds of EU nationals (up to 2 million people) who have already been in the UK for five years, the Inquiry proposes a streamlined system using Local Authorities’ Nationality Checking Services, who already help people with the paperwork for citizenship applications.

It suggests checking these applications more efficiently using existing Government records held by HMRC, the DWP and the Ministry of Justice. The remaining cases would be processed by a dedicated team at the Home Office.

The Inquiry also recommends that the costs of applying for Permanent Residence is capped so those affected can secure status with minimum of expense.

British Future brought people together for this Inquiry because it was clear they would be able to find common ground, despite being on different sides in the EU referendum and on opposing benches of the House of Commons.  There is wide political and public agreement that the status and rights of EU nationals who have made their homes in Britain should be sorted out as soon as possible. ICM research for British Future (1) finds that 84% of the British public supports letting EU migrants stay – including three-quarters (77%) of Leave voters – with any future changes to freedom of movement applying only to new migrants.

“Our Inquiry found that people from different sides of the referendum and politics can quite easily agree on practical, straightforward ways to ensure that EU nationals can stay in Britain with their rights protected. That’s the right thing to do and something that most voters agree with too.”

“We determined that the triggering of Article 50 should be the cut-off date, after which EU citizens moving to the UK would not be entitled to stay permanently after Brexit. This would limit any ‘pull factor’ for EU citizens not already in the UK.

“Britain should make clear at the start of the Brexit negotiations that EU citizens already here before that date can stay. This would send a clear signal about the kind of country the UK will be after Brexit and the relationship we want with Europe. We should expect reciprocal deals for Britons living in European countries, but Britain should make the first move to demonstrate good will.”

“EU nationals working in the UK and making a contribution are anxious about what happens to them when Britain leaves the EU. They need to know about their future rights to live and work here. Everyone agrees this needs to be resolved quickly and fairly. Our inquiry now has practical recommendations for how to do it. This shouldn’t be a matter for negotiation. The Prime Minister should make the first move to unblock this ghastly uncertainty. It is morally right and pragmatically sensible.”

Seamus Nevin, Head of Employment and Skills Policy at the Institute of Directors, said:

“Businesses throughout the UK are very clear that confirming the status of EU migrants resident here is the right thing to do. The evidence the inquiry received showed that uncertainty from valued employees about what will happen to them is tangible in workplaces across the UK. Our members can’t plan for the future or give their employees the assurances they need until government sets out its plan.

“Ending this worry and uncertainty, both swiftly and fairly, is not only the humane thing to do. It is also essential to avoid major disruptions to workforce planning and business development if British companies are to be able to prepare to succeed in life outside the EU.”

Nicolas Hatton, chair of EU citizens’ rights campaign group the3million, who will today hand in a letter to No.10 Downing Street from representatives of EU citizens in the UK and UK citizens living in the EU, urging that they are not treated as ‘bargaining chips’, said:

“the3million welcomes the publication of this report which confirms what campaigners of both the Leave and Remain campaigns said: the referendum was not about the rights of EU citizens living here. We call on Theresa May to take this opportunity to ring fence our rights from the Brexit negotiations now. We are not bargaining chips, we are people.

“We are also positive regarding the suggestion to streamline the system used to register all 3 million EU citizens and we welcome the idea of a financial cap so no one is left behind.”