As crunch time looms on PM David Cameron’s renegotiation of Britain’s relationship with the EU,writes Sunder Katwala, attention remains focused on restrictions to EU migrants’ access to UK benefits . Many voters will agree with the principle of contribution – that people must put something in before they get something out of the benefits system.

What voters won’t believe are claims that this reform is likely to have a big impact on immigration numbers. There’s little evidence that the benefits system is a significant pull factor for migrants from the EU. Our research shows that benefits reform may reassure many voters that migrants coming to Britain have the right intentions – to work hard, pay taxes and make a contribution. That would never be enough for the minority who would shut the borders, but moderate sceptics among the public will see it as a deal worth considering.

In campaigning to Remain, the Prime Minister will need to defend the principle of free movement as part of the ‘deal’ of being in the EU club. The welfare changes that Cameron looks on track to achieve will also allow the PM to say that he’s aware of the pressures as well as the gains from EU membership. What we await this week, though, are the crucial details.

Here’s what Sunder wrote in January’s publication How (not) to talk about Europe,  on the public response to a welfare deal:

It is not surprising that immigration is dominating the debate about the Prime Minister’s renegotiation of Britain’s relationship with Europe.

One of the main reasons that we are having this referendum is, in a word, immigration. The issue is considerably more salient and important to the public than the EU itself, and it is the issue which drove UKIP support to levels which the 1990s focus on red tape and sovereignty never achieved.

Immigration will undoubtedly be a major issue in the referendum. Neither side has yet answered the questions which would enable voters to make an informed choice. 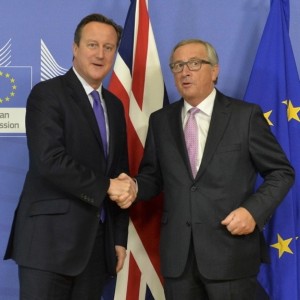 The ‘Remain’ side would prefer not to talk about immigration, beyond saying it is part of the free trade deal. Rival ‘Leave’ campaigns disagree over whether immigration is the trump card in this referendum, as Nigel Farage has argued, or whether it could prove double-edged. Dominic Cummings, former special adviser to Michael Gove and a key strategist for the ‘Leave’ campaign, has written that “The official Out campaign does not need to focus on immigration,” on the twin grounds that those angry about immigration are already motivated to vote to leave the EU, while “focusing on it would alienate other crucial parts of the electorate”.

The Prime Minister’s focus has been on changing the welfare rules for migrants, so that EU migrants are only eligible for in-work or out-of-work benefits after a qualifying period. The case for and against Britain’s EU membership is doubtless a much bigger one than welfare benefits for migrants, but there is little doubt that this reform would be popular with the British public if it could be delivered: our research has found that is the change to EU immigration that the public would most like.

The Prime Minister has proposed a four year waiting period but a compromise on the details could find favour too. Indeed, the British Social Attitudes survey shows public opinion to be mildly softer than the government’s proposal: 61% of people would favour EU migrants having full and equal access after three years, while a significant minority (37%) favour a delay of just one year. Only 18% of people say EU migrants should wait five years or longer for equal access, while only 1% say EU citizens should never gain the same welfare rights as British citizens. This shows that most people do see welfare access as a club, where people do need to earn entitlements, but also that they should then have equal status within the club that they have joined.

The reform may prove difficult to achieve because of political objections from other EU leaders or legal rules against discriminating against EU nationals from other countries.  It may be that a political deal between governments could find a formula to resolve this. Otherwise, the main route to changing the welfare rules for EU migrants would depend on a more far-reaching reform of British welfare towards a more contributory system, affecting UK and EU citizens alike, which could prove a bigger reform agenda than the referendum timetable allows.

The Foreign Secretary has suggested that, if the welfare changes that the government is seeking don’t prove possible, the British government could instead argue for “quantitative controls” – limits on the numbers of EU migrants allowed in. But he also acknowledged that other EU governments would find that harder to agree to.

David Cameron’s agenda could have more impact on public opinion than his critics on both flanks acknowledge. But another problem is not just how much of his proposed reform he can get: it is also the government’s argument about what would result from it. The new rules could be sold effectively as a response to public concerns that those who come to Britain are here for the right reasons; it’s less clear that a claim that such changes would significantly reduce the levels of EU migration is credible.

EU migrants would be less well-off in their first years in Britain if they were unable to claim tax credits, but that would not negate several other attractions of Britain for those who come here to work.  The Polish migrants who took part in British Future’s research in Southampton spoke of their experience of Britain being a place where those seeking work could find it. They said they could not see how anybody could look for work for six months in the south of England and not succeed – and often spoke about how and why they had taken entry level jobs for which they were over-qualified, because they saw Britain as a country where promotion and progression in the workplace were possible for those who work hard. A growing economy and the English language are positive features of the UK that can’t be changed for EU migrants alone.

If achieved, welfare reforms could have a moderate impact on immigration numbers, but there is little to suggest this would be transformative. Cynics might suggest that the referendum will take place before voters find out what the actual impact has been. That risks underestimating how far previous failed predictions and promises have corroded public trust – first, with the Labour government wrongly anticipating fairly low levels of immigration from Poland after 2004, and then with the Conservative promise to bring immigration numbers down, before seeing them go up instead.

The detail of EU negotiations could perhaps lead to new offers that can be made about future arrangements too, such as maintaining seven-year transitional periods for new members like Croatia, or making the highly hypothetical future accession of Turkey conditional on different arrangements. An ‘emergency brake’ could offer reassurance that millions could not all come at once, but is unlikely to be set below current levels of EU immigration

The reality is that it would not be possible to make any firm pledges on how far current EU immigration numbers could be reduced while Britain remains in the club.  Remaining in the EU means a higher level of unskilled migration than people would ideally want.

A more effective defence of EU membership, which includes free movement, can’t just involve symbolic reassurances about future scenarios: it needs to focus more on practical plans to handle migration better. Since it cannot promise to directly control the level of EU migration, the government should make a direct link between the numbers of EU migrants and the resources that go to local areas.  Higher levels of EU immigration does create pressure on local services, but also means more people in the UK working and paying taxes. It would make a difference if the public could see that those resources didn’t disappear into the Treasury coffers, but do follow the flows of people around the country.

When immigration is above the tens of thousands target, that should be seen to trigger an increase in resources to the Government’s new Controlling Immigration Fund, with a formula that means those resources are directed to the areas of most rapid change. This policy would require better and faster monitoring of population changes, which is necessary to ensure that if Boston, Grimsby or Southampton are hosting large proportions of EU migrants, people can see how the funding to pay for the school places, doctors’ surgeries and housing needs will follow flows of population more quickly than in the past. The government could consult on whether requiring EU migrants to register locally would assist with this – a practice which is mandatory in Germany and the Netherlands.

Immigration is going to be a major theme of the referendum – but both sides have important unanswered questions. What much of the public might ideally want -selective immigration based on skills, from inside as well as outside the EU, but without having to leave the club to get it – is not an offer that either side can put on the table. Both need to do more to set out a real-world plan of what can happen to immigration if they did win the referendum. Pro-EU voices will need to set out a plan for what they can do to manage relatively-high levels of migration better, while  Eurosceptic voices have so far said next to nothing to answer the questions about what would or would not change if Britain did leave the EU.