How the ethnic minority vote cost Theresa May her majority 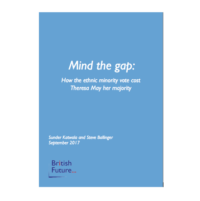 Theresa May’s party would have won an additional 28 seats, securing a majority of 42, if the Conservatives had closed the ‘ethnic minority voting gap’ and secured the same level of support from ethnic minority voters as they did with the public as a whole, according to new research from British Future.

Even if the Conservatives had halved the ethnic vote gap, they would have won an additional 10 seats, taking Theresa May just past the winning post.

There is a strong pragmatic case for bridging the ‘ethnic minority voting gap,’ as Britain’s growing diversity means the penalty will get higher at each election for parties that fail to reach out to non-white voters. But there is a principled case too: a One Nation party should be able to appeal equally to Britons of every creed and colour.

The report also challenges the Labour Party, despite its strong performance with ethnic minority voters in the 2017 General Election, not to take these votes for granted. Partisan party allegiance is in decline, the authors state, and complacency could backfire – particularly with younger voters who were not even born when Labour built its historic reputation with ethnic minorities, passing the pioneering anti-discrimination legislation of the 1970s. A Labour Party that aspires to govern, the report says, will need to expand its appeal to a broader coalition of voters, including to middle-class, aspirational ethnic minority voters living outside Britain’s biggest cities.

Britain’s growing diversity is a demographic and electoral fact that no political party can afford to ignore. An estimated 10% of the 2017 electorate is from an ethnic minority – somewhat lower than the share of the population as a whole (around 14-15%) due to citizenship, voter registration and age effects, but a pool of 3 million votes all the same. What’s more, that proportion will increase at every election because Britain’s non-white population is young: fewer non-white voters die each year while a greater number reach voting age and join the electorate. This fact poses an obvious challenge to a Conservative Party that only secured a fifth of these votes in 2017.