Enoch Who? ‘Rivers of Blood’ is ancient history to young Britons of 2018

Fifty years on from his infamous ‘Rivers of Blood’ speech, does Enoch Powell’s name still loom large over today’s debates on race and immigration? Not if you’re under 40, writes Steve Ballinger.

When we showed a picture of Enoch Powell to local citizens in our West Midlands research groups, alongside those of other local politicians, only a few of the older participants could recognise Enoch.  None of the under-30s could identify him and only a couple had heard of Powell and his infamous speech – to them, ‘Rivers of Blood’ was something from the distant past. “He looks like someone off Peaky Blinders,” one participant commented.

In the West Midlands, where Powell served as a Wolverhampton MP for 24 years, polling finds that three in ten (29%) could recognise him from a picture – lower than the national figure of 36%. Just 9% of ethnic minority respondents recognised the politician who suggested that their forbears could never integrate in Britain.

Only among older respondents is awareness more widespread, with 69% of 55-64s and 82% of those aged over 65 attributing ‘Rivers of blood’ to Powell. In research groups, older people recalled the controversy around the speech, including Powell’s repatriation offer of £1,000 to help people ‘go home’ (and Lenny Henry’s response years later – “But it’s only 50p on the bus to Dudley”). One person could even tell us the street that Enoch lived on. Yet they too felt Powell’s appeal was primarily to past generations. “I think the older generation would say he was right but the younger generation, we’ve all integrated and we’ve all got friends of different backgrounds,” said one participant. Another added:

“I remember my gran talking about it and agreeing with it, my grandad as well, Enoch Powell was right, I remember all of that… Not so much now for me, people I speak to now, but for the older generation, immigration was new to them and it was a scary time for them.”

In some respects this was to be expected – for anyone under 20, Powell had died before they were born – but the extent and the nature of the generational differences was striking. So too was the gap between men and women: men were twice as likely as women to identify the politician most associated with ‘Rivers of Blood’, with two-thirds (65%) correctly choosing Enoch Powell compared to a third (32%) of women.

We found a similar generational gap among ethnic minority Britons. Those who were alive at the time of the speech recall Powell, with 91% of over-65s and 76% of 55-64-year old minority respondents picking out his name. For their children and grandchildren, however, ‘Rivers of Blood’ has little meaning: just 12% of 18-24s knew that the phrase came from Powell. 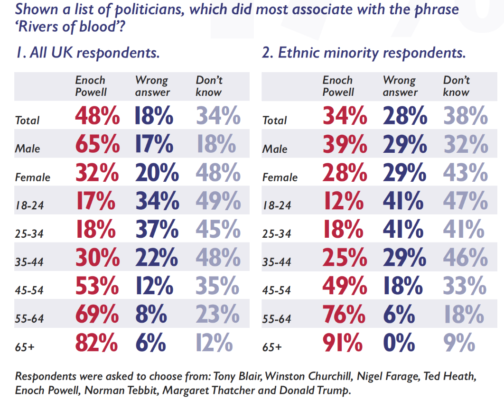 Yet younger people are less confident in the progress that Britain has made on attitudes to race and diversity over the last half-century. While two-thirds of over-55s think there is less prejudice today than in 1968 when Powell gave his Birmingham speech, that figure shrinks to 37% of 18-24s. A quarter think things might be worse today.

Young Britons, raised in a society that has gone through many of the debates and dilemmas about race and diversity and come out the other side, rightly have higher expectations that they should not face prejudice. As a black member of our over-55s focus group in Wolverhampton said:

“When I was growing up it [racism] was expected because it was there all the time, but now they shouldn’t expect that to happen…. but it does happen all the time and they can’t deal with it as much as I could when I was younger.”

For those growing up in Britain today, Enoch Powell and his ‘Rivers of blood’ are ancient history. But it is cold comfort to them, if they experience prejudice, to know that it was worse for their parents or grandparents. They want it to be better now.

Extracted from Many rivers crossed: Britain’s attitudes to race and integration 50 years since ‘Rivers of blood’, published this week by British Future