How do we counter extremism without restricting debate?

The new report from the Commission for countering extremism offers a strong foundation for a clearer and more focused approach to hateful extremism, writes Sunder Katwala. 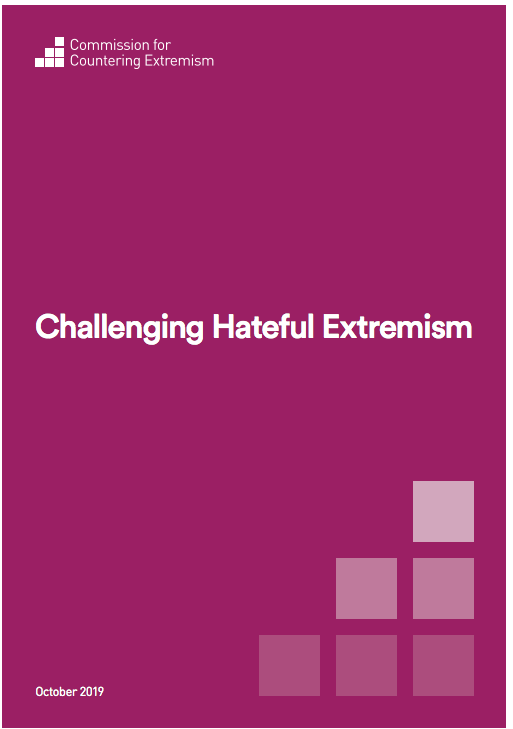 How do we successfully challenge extremism in increasingly polarised times? Everybody is against extremism – but it is difficult to make a start if we haven’t even agreed what we are talking about, writes Sunder Katwala.

Sara Khan, leading the Commission for Countering Extremism, notes in Challenging Hateful Extremism, the independent Commission’s route-map towards building a broader consensus that the loose “over-use of the E-word” can be part of the problem of trying to tackle it effectively.

The Commission’s report offers a strong foundation for a clearer and more focused approach to hateful extremism. Its argument ­– that we need to define, isolate and take down the most hateful and damaging extremism, without getting caught up in politics or limiting free speech – is a sound one. Yet the early skirmishes ahead of the forthcoming General Election shows why it will be challenging to pursue this. Important challenges to the major parties – over their approaches to antisemitism and anti-Muslim prejudice – will also get caught up in broader political debates, where charges and counter-charges of extremism get conflated with political disagreements, and broader debates about political civility and the tone of discourse.

I was part of the advisory group which offered independent input and challenge to the Commission from a wide range of perspectives (without being responsible for the content of the final report). One challenge we highlighted is how extremism is highly subjective. Nobody thinks of themselves as an extremist: indeed, most extreme groups present themselves as movements seeking to counter the extremism of others. Fringe Islamist groups, like the banned al-Muhajiroun and its offshoots, or groups like Hizb-ut-Tahrir, which have not been proscribed, claim that the real motive of western governments is to eradicate their faith entirely from the public sphere, and that they are reacting to this. Far-right movements such as the English Defence League or the Football Lads Alliance claim that they are mobilising to take on an Islamist threat that the political classes prefer to ignore. This creates a somewhat symbiotic relationship as these groups present themselves to their target audiences as a response to the existential threat posed by the other.

The Government’s existing definition, centred on seeing extremism as “the vocal or active opposition to our shared values” rather depends on a strong consensus as to what our shared values are. The definition cites democracy, the rule of law and mutual respect and tolerance of different faiths. This risks becoming rather circular if trying to make practical use of it to define where intolerance should not be tolerated. The majority of responses to the Commission’s calls for evidence were sceptical about the practical utility of the Government’s definition – and the Commission is calling for a rethink.

Its proposal is for a tighter focus, and a clearer description of “hateful extremism” – encompassing the inciting or amplifying of hate, the hateful targeting of individuals and making the moral case for violence. A perfect definition of extremism will probably always be elusive,  particularly around the contested boundaries, which can shift as social norms change. What practitioners need is a useful working definition that can be put into practice, to target the most important threats, without curtailing robust democratic debate, nor excluding views as illegitimate simply because they are outside a mainstream consensus. So what should we be able to agree on? Meeting the threshold of hateful extremism – the Commission suggests – requires behaviours that actively promote hatred, that depend on hostile and supremacist beliefs about the existential threat from an out group, and which are likely to cause significant harm, such as by restricting the freedoms and rights of others.

Some forms of extremism may meet only one or two of these conditions – somebody may hold hostile or hateful beliefs about another group, but do nothing to promote them. The Commission’s argument is that it is the combination of all three factors which would rank high enough on the risk register to be a priority for action, whether that is by the state enforcing the law, or by action in civic society to isolate and marginalise those promoting such hateful conduct.

The research process underpinning the Commission’s work showed how patchy the evidence base is about extremism, partly reflecting the lack of clarity about definitions, and the difficulty of measuring anything using something as vague as the Government’s current definition.  It is unsurprising, and sensible, that there is considerably more political, media and public interest in extremist threats that seem to be rising – and much less in those that have faded from view, as with the political violence in Northern Ireland which claimed 3,500 lives over three decades late in the last century. So there is no historic data, over time, which allows robust claims to be made about whether extremism is rising or falling – and it is rare to have robust evaluations of what has worked, and what hasn’t, in checking it.

There are new threats, both domestic and international, which drive the growing salience of extremism. Those with hostile and extreme views have a much greater share of online voice, making it rather more possible to live your life in an extreme milieu, where extreme and hostile views are normalised, even if they are shrinking from society. It is too early to tell how great a challenge these may present to the sustained long-term inter-generational shifts against intolerance in British society, with racism falling significantly over two generations, and prejudice against gay people shifting much more rapidly. Thinking about how to protect the social norms that we have built offline – and who is responsible for protecting these boundaries – remains very nascent. The report captures how often those involved in challenging extremism are targeted online – and the weakness of the response from either social media platforms or the police in curtailing these.

Ultimately, effective counter-extremism strategies can only provide one flank of a broader long-term strategy. It is in the nature of counter-extremism that it has been primarily a reactive exercise: any democratic state is going to need to undertake intelligence and policing operations against those seeking to perpetrate violent extremism, for whatever cause. The public understand the need to tackle terrorist violence but, in a liberal democratic society, the need to reduce the oxygen for extremism provided by broader circles of ‘tacit consent’ will always provide a much more complex debate, because the boundaries between legitimate political dissent and extremist politics will always be more contested.

Counter-narratives towards extremism risk being a call to inaction – “don’t be an extremist”. It can also valorise and glamorise groups – whether ISIS or Britain First – if we concede the frame, by engaging primarily with the arguments that they wish to start, inadvertently legitimising their claims to shape debates about identity, whether for majority or minority communities.

Ultimately, the long-term success of counter-extremism will depend on our sense of common citizenship and the quality of contact and relationships in a plural society. The Commission recognises this, yet the role of a positive vision in underpinning counter-extremism strategies has rarely extended beyond rhetorical assertions of fundamental values, without ever undertaking the work to ensure that these are genuinely shared, and felt to be so. We will need calls to action, not just to inaction, with an inclusive vision of British society that we want to share, and the role that we can all play to narrow the gaps and distance in our society which gives hateful narratives of ‘them and us’ the space that they need to fester.