Community, friends and neighbours helping us get through Covid, finds Talk/together

It's those closest to us - alongside the NHS - who people credit with helping them get through the Covid crisis, finds new research for the Talk/together project. Steve Ballinger looks at the latest interim findings.

More than 100,000 people have taken part so far in Talk/together, the UK’s biggest-ever public conversation on what unites and divides us and what could bring us closer together. Talk/together is asking everyone to share their views on divisions and unity, both during Covid and beyond, in a short online survey at www.together.org.uk.

Through the responses to date we’ve been able to track, since July, how unified or divided people feel their local community is – and how they feel about the country as a whole. We’ve found that most people have remained confident that their local community is sticking together, consistently giving an average score of around 6 out of 10 when asked to rate how unified people are locally. That contrasts with a sense of national unity that has been much more fragile, with scores falling below 4 out of 10 last month. 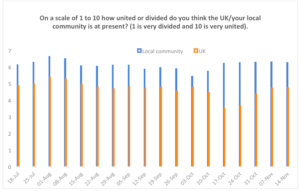 Most people say they’ve been impressed with the local response to Covid where they live. New ICM polling released today from Talk/together finds that, after the NHS, it’s those closest to us whose response has impressed us most. The ICM poll, conducted last weekend, finds:

In contrast, only 24% said they had been impressed with the Westminster government and just 17% were impressed with MPs. More than half were disappointed by their response to the pandemic.

And interestingly, people are ambivalent about whether they’ve been impressed with the response of the UK public as a whole. Around one-third have been impressed, another third disappointed and the remaining third on the fence. Why is this?

Most people look around them and see people trying to do their bit: staying at home and wearing a mask if they have to go out. They speak to their family and friends and hear that they’re doing the same. Then they turn on the TV and look in the paper, and see stories about illegal parties, or in the summer pictures from packed beaches. We remember the ‘Bog roll bandits’ from back in the spring, too.

In some places there’s been a bit of finger-pointing too, at other groups who are perceived to be flouting the rules.

This has some implications for society when we do come out of Covid, too. We may find that many neighbourhoods are more connected than they were before we’d heard of Coronavirus: people have met their neighbours while doing their daily exercise, or have joined a local WhatsApp or Facebook group. They may have done the shopping for someone on their street. People who may have already known each other, and were from similar backgrounds, have bonded more closely together.

What’s missing, though, is the ‘linking’ and  ‘bridging’, between the public and institutions, such as councils, and between people from different backgrounds. We really do need linking and bridging if we’re to build a more connected society that is kinder and less prejudiced. With people working from home and going out into shared spaces less often, there’s been fewer opportunities to meet and mix with people who are different to us, whether by ethnic or faith background, by age or income, or indeed by different political beliefs.

Acts of kindness and connection from neighbours and friends have helped people to get through this pandemic. For some it’s sparked a sense of community that wasn’t there before, which they want to keep. Yet at the same time people remain worried about divisions on a national scale.

That’s something that has been brought up in the online Talk/together discussions that we’ve been holding with members of the public up and down the country – this week on my home turf of the West Midlands. My colleagues Jill Rutter and Jake Puddle, who are conducting the discussions, are blogging about the discussions as they go.

We’ll publish the full findings of the Talk/together project at the start of next year. That will include a final wave of nationally-representative research to test public attitudes, together with analysis of the online survey, public discussions, meetings with local stakeholders across the country and evidence submitted by experts and interested groups. We hope it will be the most authoritative evidence base available on how Covid has affected our society and what people want to see happen next – which will help set the agenda for the Together coalition’s future advocacy and public activities. You have until the end of December to have your say – do please fill in the survey at www.together.org.uk