Changing the game – How football came home for me this summer

As we look ahead to tonight's game against Sweden, Lucy Buckerfield discusses the rise of women's football, its inclusive approach and her experience of the beautiful game.

My first memories of football were on the concrete playground of my central London primary school, playing alongside one other girl in our Velcro school pumps. Even at that age we felt judged, as our choice of trousers instead of skirts to play at lunchtime was considered a controversial move at the school gate. When it came to match time, I can still remember the astonishment on the faces of my male classmates as one of us, or Chloe – far silkier on the ball than me – managed to sneak a goal in, and the thrill of proving all those boys wrong.

So while I’ve always loved football, the pitch didn’t always feel like a place for me growing up. Nothing quite beats the thrill of watching my team play. But the macho stadiums never truly felt comfortable to me as a young woman either. Until now. Whatever the result of tonight’s game – England’s Lionesses face Sweden in the semi-final of the Euros 2022 – the nation can hold its head high at the friendly atmosphere created in packed-out stadiums across the country.

If the boys underestimated us in the playground, it is not surprising that they did. Women have been playing catch up on visibility and fighting for inclusion in the game ever since 1921, when the English Football Association’s consultative committee effectively banned women’s football based on the assumption it was a threat to women’s health. Deemed ‘quite unsuitable’ medical ‘experts’ claimed football could damage women’s ability to have children.

The impact that ban had on attitudes to women in the sport was felt for decades. In 2020, YouGov found that close to one in five men (18%) were still opposed to equal coverage of women’s sport. Luckily, they should be a minority as interest was on rise amongst men, with 24% more interested in watching women play. In football, documentaries such as Alex Scott’s on BBC this week, highlighted the continued prejudice British players face to be taken seriously, and strikingly the online abuse they face. The Hashtag Whocares still trends each time a young women’s wonder kick goes viral.

In the face of the online trolls, it’s encouraging to see brands and corporates waking up to the audience potential in the women’s game, though the  though the Women’s Super League in UK, is one of first to offer professional contracts to all players, it still needs investment to be profitable. Brands are not afraid to address the troubling abuse in the game, as it grows in popularity with campaigns such as EE’s Hope United encouraging bystanders to tackle sexism together – ‘Sexist hate is not her problem’ during these Euros. Similarly, the Lionesses have had support from fellow England men’s team players as Georgia Stanway reported to have said – ‘[they have] Just [been] supporting us, willing us all the way, saying they’re coming to the next match. We’re definitely a united nation.”

A new spirit of inclusion

I finally felt that unity and belonging – when I took my seat to watch England’s 8-0 victory over Norway last week. Surrounded by a welcoming crowd of 28,281 was full of young girls and boys, and excited women we all waited with anticipated for the goals to begin. A combination of affordable tickets, in easy to get to stadiums such as Brighton’s has been a winning strategy for the FA to demonstrate the appeal of women’s game and a national team we can all get behind. Chants of ‘It’s Coming Home’ echoed around the stadium far long after the final whistle.

Wembley’s sold out final this Sunday is set to break record attendance figures. The TV viewing numbers for tonight’s match will likely do the same as the more inclusive crowds of England supporters – of all ages and genders – clearly appeal to new audiences and are the standout success of this tournament. It sets out a new meaning to inclusive Englishness through support for Lionesses.

The elephant in the room for England’s elite game, when it comes to inclusion is the ethnic diversity of its players, which still remains low – there are only 3 women of colour in this tournament’s England team. Access to training and pitch space in more economically and social diverse areas is considered a key factors in the lack of progress on these fronts. What was good to see with my own eyes at the game, was that this seemed not to have discouraged who cheered the Lioness on in the crowd. But more still needs to be done to improve opportunities for the next generation of young girls, England can’t drag it heels and must look to help great organisations like Football Beyond Borders. 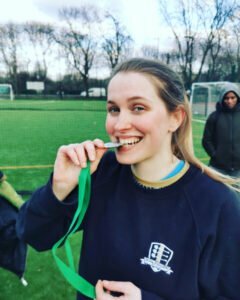 In contrast, the all-encompassing nature of the grassroot women’s teams echo’s the atmosphere seen in the stadiums. It’s what got me back into playing on the field, as well as watching on the side-lines. I picked up a copy of Time Out in 2019 to find Goaldiggers FC – a non-profit club set up in London to make football more available and accessible to all women and non-binary people regardless of previous experience or ability. The team’s popular ethos where players are picked on availability rather than ability, means their 200 plus team and waiting lists are full – though they recognise more can be done to include certain groups – they hold priority spaces for people of colour, non-binary people, trans women, players over the age of 40.

I am now part of an ever-growing inclusive community of footy supporters, proud to support this England team and who I will be eagerly watching tonight’s game with – 100+ women in a bar smashing gender stereotypes left right and centre! Of course, the best way for the Lionesses to address the sexist trolls online, and stand up for many women and girls who have been underestimated on and off the pitch – is to win tonight and reach the final of the tournament, repeating the success of the England men’s team last year.

But whatever the result of tonight’s match you can be sure that women’s football is here to stay. That is worth cheering about. Now the inclusive message of the women’s game must continue to grow and the men’s game should never underestimate its appeal again.