Can anyone win the culture wars? Conservative fringe report

“We need better strategies to call off culture wars without running away from debates about identity,” a Conservative conference fringe heard. There is a need to engage with issues of substance, without stoking divisions or getting distracted by trivial Twitter debates.

While fighting a ‘culture war’ may bring short-term political rewards, the lesson from America is that it fails in the longer term, Boston MP Matt Warman told a packed Conservative conference fringe yesterday. “That seems to have worked very well for Donald Trump once, but much worse the second time,” he said – while acknowledging that not everyone in his own party might agree.

The event, ‘Can anyone win the culture war?’ was hosted by think tanks British Future, Bright Blue and the Policy institute at Kings, as well as Ipsos MORI.

Kelly Beaver of Ipsos MORI and Bobby Duffy of the Policy institute at Kings kicked off the event with some data. We may sometimes feel that our society is divided, Kelly said, but perceptions of division in the UK are actually much lower than in many other countries – not only the US but among our European neighbours too.

And while those of us scrolling through political Twitter may be very conscious of the so-called ‘war on woke’, it has not fully broken through with the public. Our society can hardly be at war over ‘woke-ness’ when half of the country aren’t aware of what the word means. There are many issues, Beaver suggested, on which society has become more liberal over recent decades and on which there is broad agreement – attitudes to homosexuality, for example – and yet media discussion tends to focus on those issues where there is more disagreement.

Bobby Duffy also questioned the idea that the UK is splitting into two tribes with little common ground. “We hear most discussion in media and social media from noisy extremes,” he said. “There’s much more nuance in public discussion than might appear.” Citing his recent research for the book ‘Generations’, he criticised portrayals of a unique new conflict between old and young. “Phoney generational stereotypes are fuelling the culture war,” he said. “Culture wars are not down to a new generation of snowflakes or social justice warriors.”

While the extent to which Britain is engaged in a ‘culture war’ may be exaggerated by the media and some politicians, that does not mean it is unimportant or can be ignored. “Too much disagreement can be very paralysing,” said Ryan Shorthouse of Bright Blue, “But debate is good and healthy and necessary for democracy.”

Sunder Katwala of British Future agreed. “Issues of race and identity do matter to people, and so do their symbols,” he told the audience, “So it would be a mistake to just duck out of debates about statues or taking the knee as culture war distractions.” Getting it right requires the ability to distinguish substance from trivia, or we risk having the worst of both worlds, too focused on taking down old episodes of Fawlty Towers while we let racists run riot on social media. 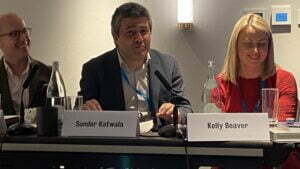 Matt Warman, Conservative MP for Boston and Skegness, agreed that this ability to engage with substance and not with trivia was important – asking whether his fellow politicians can sometimes expend a lot of energy on debating the content of Last Night of the Proms at the expense of big-picture issues like inequality.

Navigating culture war issues is not straightforward. “It’s not that politicians don’t care about taking serious action on these debates – it’s that they’re difficult,” said Warman. “I really wish there was a silver bullet, but there isn’t.”

Yet panellists felt we could rise to the challenge of finding common ground. “A lot of people say they don’t want culture wars – but their solution is often that the people who disagree with them should pipe down,” Sunder Katwala said.

“We need better strategies to call off culture wars without running away from debates about identity.”

Trying to defuse a culture war by pretending it isn’t there and ducking out of the argument is only going to get politicians so far. There is a need to engage with the real issues of substance – on issues like race, history, gender and identity – because they, and their symbols, do matter to people. But politicians need to do this without stoking divisions – or getting distracted by trivial Twitter debates that last no longer than a news cycle. 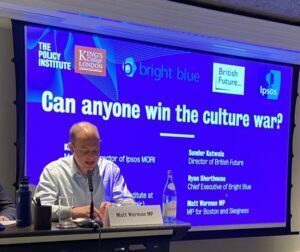