There was much comment ahead of the General Election, writes Sunder Katwala, prompted by UKIP’s victory in the 2014 European elections and high-profile defections of MPs, about the electoral losses that the Conservative Party would sustain as disgruntled voters abandoned David Cameron for Nigel Farage’s UKIP. Another coalition looked inevitable; a Conservative majority nigh-on impossible.

Many voters did change their party rosette from the blue to the purple. The Conservatives were no longer trusted on immigration – falling behind Labour on the issue from a 38% lead back in 2010. Those voters who cared most about immigration liked what they were hearing from Nigel Farage, and signed up to his ‘Purple Revolution’.

Yet reports of David Cameron’s imminent political demise turned out to be much exaggerated. Instead of coalition or defeat, he took the party to its first majority election victory in almost a quarter-century. The extent to which he expanded the Conservative tent to attract new voters has been under-reported; and so has the effect of this new majority coalition on the attitudinal make-up of today’s Conservative support.

UKIP’s additional three million voters came from a wider cross-section of politics than many expected. But they are likely to have included between one to one-and-a-half million people who were Conservative voters in the last election. In addition, some of the 2010 voters literally weren’t around any more: there are currently half a million deaths every year in the UK, 2.5 million over a five-year parliament. The Conservatives’ higher support among the over-65s means they are hit somewhat harder by the political demographics of death, and a reasonable estimate suggests around 750,000 of that 2.5 million would have been Conservative voters.

With these combined losses, to increase the Tory vote count 600,000 David Cameron needed to secure the votes of between 2.5 to 3 million people who hadn’t supported his party in 2010. And that’s what he did.

Cameron’s biggest source of new support was from former Lib Dems. The Conservative campaign succeeded in persuading significant numbers of Coalition supporters that, in the particular conditions of 2015, it was more important to re-elect David Cameron than to ensure the Lib Dems were there to act as a check on his party’s policies.

He also achieved the Conservatives’ best-ever result with ethnic minority voters. As many as half a million non-white Britons voted Tory in 2015, in many cases for the first time. Ipsos MORI’s How Britain Voted analysis suggests the Conservatives more or less broke even among white voters, with gains roughly offsetting losses – so a significant share of the party’s net gain will have come from ethnic minority voters.

Thirdly, Cameron’s Conservatives won some new support from new entrants to the electorate. While the party continues to fare less well with younger voters than with their elders, picking up a share of the first-time vote is clearly beneficial to the long-term health of the party.

Former Lib Dems, ethnic minorities and young people. These three new groups of ‘joiner’ voters all have two important things in common. Firstly, they tend to represent growing rather than shrinking sections of the electorate – in contrast to the older ‘left behind’ voters who were attracted by UKIP’s offer.

Secondly, they mainly see the world rather differently to the ‘deserters’ who left the party. This new support will have shifted the party’s voter base in a more liberal direction. Some ethnic minority voters may hold quite socially conservative views, for instance on the position of the family, yet they do tend to hold more liberal views on immigration, including among non-white Conservative voters – as highlighted in Bright Blue’s series of reports on attitudes to immigration. And while those Lib Dems who left the party for the Conservatives may not be among the most liberal Lib Dems, they will contribute to a liberalizing shift among Conservative support.

This long-term shift towards the centre ground on immigration is captured in post-election polling by Survation for British Future, which found that Cameron’s new Conservative majority coalition is not to the right of the general public in terms of how it views immigration.

Survation asked respondents to state whether they think immigration is good or bad for Britain, on a scale of 0-10. This enabled us to segment respondents into ‘migration sceptics’ (who scored it 0-2), migration liberals (who scored it 8-10) and the ‘anxious middle’ who see both pressures and benefits and give a score between three and seven. While Lib Dems and Labour are both made up of a coalition of liberals and the middle ground, with UKIP very strongly composed of migration sceptics, the Conservative vote looks remarkably close to that of the general public as a whole. 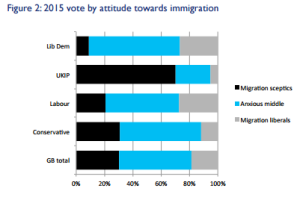 David Cameron may not always be able to keep this new coalition of support together over the lifetime of this new Parliament. Some may decide to leave in 2020, if they don’t like what they see. But his success in broadening the appeal of the Conservatives explains how the party survived the UKIP revolt over immigration. Cameron’s successors will have to work out how far the party can try to win back the supporters it lost, without sacrificing the new support that made this 2015 victory possible.