As new government figures show that 110,000 visas have been issued to Hong Kongers to live, work and study in the UK under the BN(O) scheme since it was launched in January 2021, new polling for the Welcoming Committee for Hong Kongers and British Future finds the public ready to take part in welcoming new arrivals to the UK.

New government figures published today reveal that 113,742 Hong Kongers have been granted visas to the UK through the new British Nationals (Overseas) (BN(O)) scheme since it opened on 31 January 2021 (1). The new statistics, published by the Home Office, show that 16,942 BN(O) visas were granted in the first quarter of this year (Jan-March) a decrease of 3939 on the previous quarter.

The scheme, which allows Hong Kongers to live, work and study in the UK, is one of the most significant sources of new arrivals to the UK post-Brexit and has resulted in one of the UK’s strongest ever welcoming programmes. The Department for Levelling Up, Housing & Communities is supporting 43 local organisations around the UK to meet the needs of newly arrived Hong Kongers and help them settle and integrate in the UK.

The public are welcoming too, with recent research from Ipsos and British Future showing that the BN(O) visa scheme is supported by nearly three quarters (73%) of people in Britain, with most (61%) saying they support the scheme because it is “the morally right thing to do” (2).  The research found that only 10% of people opposed migration from Hong Kong through the BN(O) scheme.

A British welcome for those starting a new life in the UK has also been shown in the huge public response to offer homes for Ukrainian refugees, and new ICM research for the Welcoming Committee for Hong Kongers shows that half (50%) of the GB adult population is willing to take part in welcoming activities for refugees and other new arrivals (3).

The polling also found that around 11 million Brits (22% of GB adults) would be interested in becoming part of a local support group to offer practical help in settling into life in the UK; one in four (22%) would be keen to attend social events to create contact between new arrivals and local people; and nearly 13 million people (25%) would be interested in helping someone improve their English, through a conversation club or Zoom conversations. 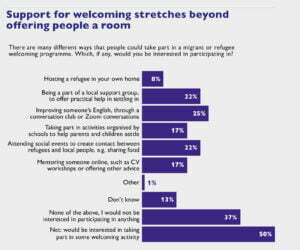 Peggy (pictured above) came to the UK from Hong Kong with her husband and two young children and are now building a life in Reading. In the short time she has lived in the town Peggy has already led and taken part in many volunteer activities including litter picking events to clean up the countryside and helping at the local Coffee and Craft Community Café. Thanks to her commitment to volunteering and integrating into the local community, Peggy, who was a social worker in Hong Kong, now has a job as a coordinator at a local project that is part of the welcoming programme for Hong Kongers.

“We need to make integration work – for all of us – if we’re to make a success of immigration to Britain.

“Millions of people in Britain are clearly willing to play their part in welcoming new arrivals  to settle and integrate into British life. That includes help learning the language, social events and the amazing public response to the Homes for Ukraine scheme.

“The government has put in place a stronger welcoming programme for Hong Kongers than we have ever seen before. If we get this right, welcoming newcomers could become a new national mission for our times, that we can all take pride in.”

Hong Kongers with BN(O) status, and their eligible family members, have been able to come to the UK to live, study and work since 31 January 2021, after the government opened the new visa scheme following the Chinese government’s imposition of the National Security Law in Hong Kong. As with other visas, after five years in the UK, Hong Kongers will be able to apply for settlement, followed by British citizenship after a further 12 months.

The Welcoming Committee for Hong Kongers is an umbrella organisation helping to coordinate the UK’s welcoming efforts across civil society, communities, business, education and government. It is conducting research to inform policy and shares best practice around the integration of Hong Kongers. It also supports welcoming organisations working to help new arrivals from Hong Kong to settle and integrate in the UK. For more information see www.welcomehk.org

(1) Research by Ipsos with British Future. Ipsos interviewed a representative sample of 3,206 online adults aged 18+ across Great Britain between 28 January- 10 February 2022. Asked their views about those with BNO status coming to live in the UK, 36% agreed that “We should do this and admit all those who apply to live in the UK”; 37% agreed “Some should be allowed in, but numbers should be restricted”; and 10% agreed “We should not do this, immigration via this route should not be allowed.”

(2) Research by ICM Unlimited for British Future and the Welcoming Committee for Hong Kongers, fieldwork 25-28 March 2022, with a representative sample of 2,012 GB adults online.