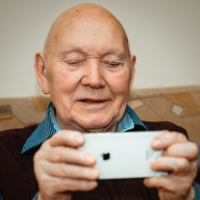 Digital divides mean charities and local authorities are resorting to ‘old-school’ communications – like letters and phonecalls, leaflets or a knock on the door ­– to reach isolated groups during the COVID-19 crisis, according to a new report by MPs, writes Steve Ballinger.

The report, ‘Social connection in the COVID-19 crisis’, by the All Party Parliamentary Group on Social Integration, details the findings of the MPs’ Inquiry, which examined efforts to reach isolated groups during the lockdown. British Future is the secretariat to the APPG.

The report finds that many efforts to reach isolated groups during the COVID-19 crisis have successfully moved online. But that can leave some of the most isolated individuals even further excluded – because they do not own or cannot afford devices, wifi or data to get online, or lack the skills or English fluency to manage online communication.

Innovation from civil society organisations and businesses is helping to bridge this digital divide. Donated laptops and IT classes delivered by phone mean some people can now get online. But many organisations are also contacting people by telephone, post or leafleting to reach those without internet access.

The report calls for an expansion of ‘Digital champion’ schemes, where volunteers support those who lack digital skills and confidence – and recommends deploying some of those who have offered themselves as NHS volunteers. When the current crisis period ends, the APPG urges a long-term commitment from the Government, educational institutions, employers and civil society to reduce digital exclusion.

Peter Gibson MP of the All Party Parliamentary Group on Social Integration said:

“We’ve been inspired by the energy and innovation with which organisations have responded to the pandemic, to reach some of our society’s most isolated groups.

“Much of that innovation been online – but the COVID-19 crisis has underlined how digital divides are making some of the most isolated groups even more excluded. “We’ve found that ‘old fashioned’ ways of communicating – through letters, the telephone and knocking on the door – are sometimes the only way to ensure that no-one is left out.”

The APPG also welcomes the increase in volunteering prompted by the COVID-19 crisis and recognises the role that volunteering can play to increase social connection. It warns, however, that a lack of infrastructure and coordination could leave some volunteers with an unsatisfactory experience – and urges government and civil society to start planning early to ensure a lasting, positive legacy for this surge of goodwill.

The report maps the distribution of Mutual Aid Groups and finds that the areas best served by such groups tended to be those with higher neighbourhood trust and lower levels of isolation and divides by wealth or ethnicity. Those areas less well served by Mutual Aid Groups, however, tended to be those with higher population churn; fewer community assets; higher levels of social isolation; and a local population with lower skills, fewer graduates and more marked income or ethnic divides. Those areas with more cohesive communities could, therefore, benefit most from increased social connection – while others fall further behind.

“There has been a hugely encouraging upsurge of willingness to volunteer and to look out for each other. The challenge for policy-makers is now to make sure we have the infrastructure and capacity to ride that wave – and to work out how best to deploy and to sustain it.

“Civic action is not always equally spread to where the need is. So there is also a challenge for everybody interested in levelling up voice and power in our society to meet the needs of areas with less civic capacity.”

The report also voices concern about reports of hate crime targeted at the Chinese and other south east Asian people. The APPG heard evidence of some localised community tensions, association with perceptions that some sections of society are not observing social distancing; and expressed concern that extremist groups are exploiting such tensions to advance their agenda.

More information about the All Party Parliamentary Group on Social Integration can be found here.