When I cast my first vote in the 1992 General Election, writes Sunder Katwala, a week after my 18th birthday, just six non-white MPs out of 650– three black and three Asian MPs – were elected to parliament. Four of them had become, in the 1987 election, the very first black and Asian parliamentarians elected in the post-war era. Even a decade ago, in 2009, there were only 15 non-white MPs, before the next three General Elections saw a rapid acceleration of the rate of change, with 27 ethnic minority MPs elected in 2010, then 41 in 2015 and up again to 52 in 2017.

But ethnic diversity in parliament is set to stall at the next General Election, just as it has become the ‘new normal’ in British politics. New research from British Future shows that both major parties have been significantly less likely to select ethnic minority candidates for winnable seats this time around than five or ten years ago. 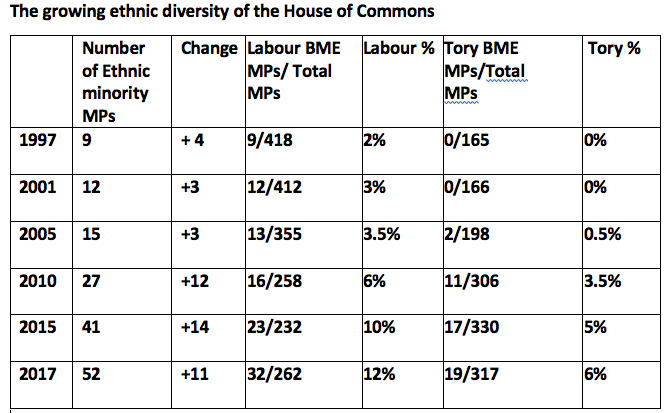 Unless there is a dramatic turnaround as the parties make their final selections, this would be the first time that the next intake of MPs to the House of Commons would be less ethnically diverse than the parliament they are joining. 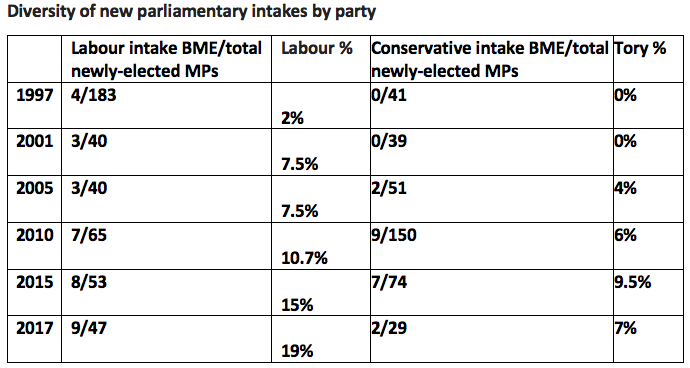 Since the ethnic diversity of British society is increasing – now 15% of the population, with one-in-five first-time voters at this election non-white – we should expect the opposite. The increased diversity of recently-elected MPs has helped to narrow the gap between our parliament and the increasingly ethnically diverse society that it represents. Jeremy Corbyn and Boris Johnson have both spoken about wanting to lead parties that look like modern Britain: they need to look into why their party’s contributions towards increasing ethnic diversity in parliament now risks slipping backwards on their watch – and at to how to get back on track.

How the party’s 2019 selections are slipping backwards

British Future has analysed new candidate selections, in seats where a party is selecting a candidate because their previous MP is not standing again, or where a party is less than 15% behind in second place. Designating such seats as potentially ‘winnable’, at least in a good year for that party, offers a reasonable snapshot of selection rates in party-held and target seats, avoiding subjective judgements about which seats the parties might prioritise in practice in the volatile political environment.

Labour has made 100 selections in such seats – selecting seven ethnic minority candidates.

Navendru Mishra has been selected to defend a Labour majority of over 14,000 in Stockport, after current MP Ann Coffey left the party for Change UK. Mishra, a trade union organiser who lives in Stockport, is also an elected member of Labour’s ruling National Executive Committee.

Three other visible minority candidates – Mark MacDonald in Stoke-on-Trent South, Azhar Ali in Pendle and Fazia Shaheen challenging Iain Duncan Smith in Chingford – are standing for seats which rank mathematically in Labour’s top 50 target seats. These constituencies would fall on a 3% swing to Labour, so are seats Labour would need to gain were it on course to win a majority.

The Labour party was twice as likely to select ethnic minority candidates for target seats in both 2015 and 2017 as it has been this time around. Jeremy Corbyn needs to make 64 net gains to win Labour an overall majority at the next General Election. If he confounded expectations by doing so, the candidate selection data shows that only three or four new ethnic minority MPs would be elected by winning those target seats. By contrast, similar gains to win an overall majority in 2015 or 2017 would have brought another dozen ethnic minority Labour MPs into the House. Indeed, though Labour made only 22 gains in the 2015 general election, ethnic minority Labour MPs won 5 of those seats (22%), while two more new ethnic minority MPs entered parliament by holding Labour-held seats. When Labour gained 36 seats from other parties in 2017, 5 ethnic minority candidates (14%) were among those winning the seats, while 4 more ethnic minority MPs were among the 11 elected defending Labour-held seats. While Labour’s class of 2015 and 2017 were 15% and 19% ethnic minority respectively, the pattern of 2019 selections on ethnic diversity is rather closer to the 2001-2005 pattern than to party selections for the last three elections.

As with Labour, the majority of selections to replace a departing Conservative MP have yet to take place. Of the nine selections in Conservative-held seats one black candidate, councillor Darren Henry, a former RAF squadron leader, has been selected to contest Broxtowe, after Anna Soubry’s departure for Change UK.

Among the top 80 Conservative target seats, of the 56 selections announced to date, a single ethnic minority candidate has been selected so far. Mohamed Y Ali, whose family came to Cardiff as refugees from Somalia when he was three years old, will attempt to regain Cardiff North for the party. It ranks 52nd on the target seat list, based on the swing needed from 2017.

Overall, those two ethnic minority candidates out of 64 selections in our ‘winnable’ category gives a current selection rate of 3%.

The Liberal Democrats – having lagged behind the major two parties on ethnic diversity – are making more progress. Having agonised, often unproductively, about how to bring about cultural change in a liberal party, the LibDems have this year discovered defections as a potential catalyst for diversity. The Liberal Party had the first Asian MP in parliament back in 1892, but Chuka Umunna and Sam Gyimah’s defections in 2019 made them the first ever black British Liberal MPs in the party’s century-and-a-half in parliament. The 2019 selections suggest green shoots in the LibDems also starting to grow their own contribution to parliamentary diversity too – with Munira Wilson selected to succeed Vince Cable in Twickenham, and four ethnic minority candidates in the 30 seats where the LibDems are within 15% of the incumbent party, so that the LibDem selections in target seats (13.5%) compare favourably to the larger parties during this parliament.

Ethnic diversity in Westminster politics has been predominantly an English affair. The SNP had one British Asian MP, Tasmina Ahmed-Sheikh, in the 2015-17 parliament, but there are currently no non-white MPs among the SNP’s 35 MPs and the Scottish MPs of the other parties. The population of Scotland – 5% non-white – is less ethnically diverse than that of England. Labour’s Fateen Ahmed in Glasgow Central appears to be the only ethnic minority candidate selected for a target seat so far, though several selections have yet to be announced.

Both Boris Johnson and Jeremy Corbyn have spoken about wanting to lead parties that look like modern Britain. They need to scrutinise why progress is going backwards on their watch at a time when British society is becoming more diverse.

Boris Johnson has taken pride in being able to appoint the most ethnically diverse Cabinet in British political history. He inherited the opportunity to do so because of the concerted efforts made by David Cameron, making rapid progress from a very low base. The 2019 selection data so far shows that progress on extending cultural change throughout the party is rather more fragile on ethnic diversity than gender equality, so is likely to stall without a stronger focus from the party leadership. There is an argument within the party that the priority given to ethnic minority outreach under David Cameron’s modernising agenda is less relevant if the party’s focus at the next election is on northern pro-Brexit towns with older and whiter demographics. Others see the broadening of the party’s reach across ethnic groups as being of existential importance over the next decade.

The left of the Labour Party thinks of itself as strongly committed to anti-racism and equal opportunities – so it would hope that its leadership of the party would deepen progress on race and representation rather than reverse it. This disappointing evidence of the party itself going backwards in parliamentary selections should spur efforts for change. If Labour Party selectorates are increasingly keen to select candidates in their own image, one challenge is that the expanded party membership remains much less ethnically diverse than those who vote Labour. Around one-in-five Labour voters is non-white – over two million of the 10-12 million votes won by the party in 2015 and 2017 – but that is not reflected in the party membership. The party itself does not collate or publish any data on ethnic diversity, but the best academic evidence available, the ESRC party membership project, estimates that the Labour Party membership is 95% white.

The overall number of ethnic minority MPs at the election is more likely to flatline than to fall, despite the small number of new candidates selected by the main parties. None of the current ethnic minority MPs has been among those to announce their retirement from the Commons – and many hold relatively safe seats, though new Lib Dem recruits Chuka Umunna and Sam Gyimah will be attempting to gain seats for their new party. Depending on the specific constituency results on election night, the total number of ethnic minority MPs might yet edge up slightly, though emulating the rapid progress of the last three elections now appears out of reach.

A volatile political atmosphere of defections, purges and rumours of a snap election means that both Labour and the Conservatives have an unusually large number of late selections to make, including some in safe seats. Internal battles over who controls and influences these late parliamentary selections are even more fiercely contested than usual.

Labour has still to select around 20 candidates, for seats where Labour MPs are standing down. Disquiet in the party about the lack of ethnic diversity is one source of increased scrutiny of how the NEC and local parties select these candidates in seats that Labour is defending. After over 100 selections for the next General Election, the Labour Party has selected a handful of Asian candidates but has yet to select a single new black British candidate this time around in a seat that could be considered in any way winnable.

No British Asian candidate, nor any ethnic minority woman, has so far been selected as a new candidate for the Conservatives in target seats where the party is less than 15% behind. The shortlists drawn up by Central Office from which local parties will select candidates in over 20 Conservative-held seats may try to address those deficits.

So late interventions in a few selection contests may somewhat mitigate the low levels of ethnic diversity in 2019 selections so far, unless those at the centre put other priorities first. But top-down, face-saving interventions from Labour or Conservative headquarters are unlikely to be a sustainable substitute for the deeper shifts in candidate selections and party culture that both parties need to undertake if they want their aspirations, to offer equal opportunities to those from all ethnic backgrounds, to be better reflected in parliament.