Remembrance Sunday is always a very solemn occasion, and this time was no different, writes Anton, a London biker. It was, however, perhaps more special than before for me this time.

I’m a biker, and a member of charitable and social riding club. We love our motorbikes, the freedom they bring and the strength they symbolise. We also work hard to do what we can to help our community, be it organising fundraisers, participating in charity rideouts, volunteering, helping those who might be struggling. We don’t ask for credit or recognition but when it comes our way it always brings with it a warm and glowing sense of contentment and achievement.

It was therefore a huge honour to be asked to supply motorbike outriders for the parade of Veterans and cadets to the Tottenham Cenotaph, in part in recognition of our charity and community work and in part because motorbike outriders raise any procession up to the next level!

Tottenham is one of the most diverse communities in Britain, and the make up of the parade and the attendees reflected that beautifully. The vicar, the lovely Fr. Bunmi, in the past a distinguished Nigeran lawyer and latterly a fantastic Church of England parish priest greeted us warmly. We shook hands with others: officers, cadets, councillors. At the prompt of the commanding officer I placed my riders at the head of the parade, and we proceeded to the Tottenham Cenotaph.

There followed a beautiful service, including prayers in English and in Hebrew, prayers for all who made huge sacrifices so we may be free, and prayers for the victims of war, refugees past and present, those currently trapped in Europe en route from fleeing wars in the Middle East and Africa, and those who fled the Nazis all those years ago. The Last Post played, we bowed our heads in remembrance and laid the poppy wreaths at the foot of the War Memorial. Following a rousing rendition of God Save the Queen led by Fr. Bunmi, our outriders escorted the parade back to the Holy Trinity Church.

One special thing about Tottenham is that it’s very closely associated with the history of British motorcycling. The ‘V twin’ engine was invented there by John Alfred Prestwich in 1901, two whole years before Harley Davidson began its existence in the United States. Zenith Motorcycles, with its revolutionary Gradua engine, was nearby and I’m proud to say that the proprietor of the current Zenith Motorcycles of Tottenham is not only a friend and a member of our riding club but the grand-daughter of one of the engineers of the original Zenith. Her family have lived in the neighbourhood for over 100 years.

Motorcycles, and more importantly their riders, have a very special place in the history of WW1. It has been argued that motorcycle despatch riders were instrumental in Britain’s victory in the Great War, by ensuring effective communications between units. 1.5 million Indian troops fought for Britain in that war, 400,000 of them Muslim. How many of those guys were bikers, crossing the deadly spaces on the front line on their rugged Royal Enfields, dodging bullets and swinging around craters? As we bowed our heads in remembrance, these thoughts crossed my mind.

After the service and the parade, we chatted with the assembled folks. One lady asked me “Where are you all from? Are you Polish?” I was a little taken aback by that question. Until it was asked, the question of differences between us hadn’t occurred to me. We were all the same, united in our respect and remembrance. I struggled to answer: “Erm, he’s from Middlesborough, he’s Latvian, she’s from Tottenham for the last four generations, he’s half Kenyan… We’re just local bikers”. The only thing that mattered at that moment was where we were and who we were with.

Conversations, handshakes and hugs over, we rode on to Thurrock Services one of the meeting points of the second highlight of this important day, the Ring of Red Ride.

The Ring of Red, al 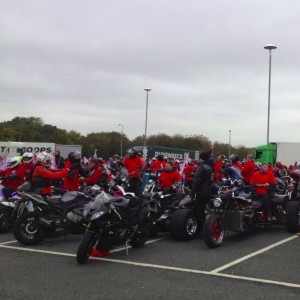 so known as the Ride of Remembrance, is a brilliant way to commemorate the heroes who fought for our freedom. Thousands of bikers, each one dressed in a red garment, ride around the orbital motorways the M25 in London and the M60 in Manchester, forming the world’s largest poppy which can be seen from space.

On arrival at the meeting point, I was struck by the mood. Many hundreds of riders, a sea of bikes and red t shirts and helmets, and a sense of joy and togetherness. Under the helmet and leathers everyone is equal. What gets you respect is not the colour of your skin or where you are from (how could anyone tell?), it’s the fact that you ride, and that on this fantastic occasion you showed up to pay your respects, along with thousands of others. The choir of a thousand motorbike engines, rising up in a song of praise and thanks, the feeling of being part of something so much greater, what better way could there be to show our gratitude to those who fought so that we may be free?

Because that is what it’s all about. You start riding because you value freedom. Freedom from mundane things like traffic. But a greater freedom too, the freedom to be who you are and to have love, mutual respect and friendship with whoever you choose. We rode to show our thanks and we rode to remember.

Those who organise this amazing ride are the some of the best folks in the riding community. Without their hard work, our Remembrance may still have been as profound and poignant, but it would certainly have been less impactful.

Anton is a London biker who works for a UK based criminal justice charity.