2012 was a year where British pride was at an all time high. The London Olympics, Team GB and the announcement of the royal baby gave us all a renewed sense of pride, but behind these celebrations, the Armed Forces were always visible. Sarah Cottam of Loughborough University talked to a group of young people to find out how they felt about the Armed Forces after 2012.

The forces can, for many, be seen as the country’s backbone, supporting everyone regardless of their gender, race, or in particular, age. There are constant reminders published in the news that someone’s parent, friend, child or partner is selflessly risking their life, particularly for the futures of Britain’s young people. It is therefore unsurprising that many people of our age have pride in the British armed forces, as they fight for our country, allowing us to enjoy such moments as the London Olympics. 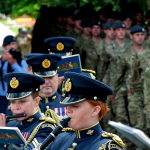 “They are people who we can look up to, who are protecting our country and giving us a safe future,” said 21 year-old Tom from Loughborough University.

i19 year-old Julia agreed, saying “the British armed forces have, and will, always instil a sense of pride and patriotism in me: the fact that a collection of strangers, all with different backgrounds, can come together and work with such efficiency and willingness simply due to a shared goal to support their nation, is something to be proud of.”

“To be a member of the British armed forces is recognised globally and I think that many people look up to them with the respect and appreciation that they deserve – these sentiments are why most people will feel proud to be British,” she added.

Mary, from Durham University, said that “having close friends training to be in the army, I am amazed at the level of dedication, discipline and courage that they show, as well as a definite sense of loyalty to their country. I think it is this commitment shown by all of its members that makes the British army so strong although it is not particularly large. It is because of these values that I am proud of the British army.”

20 year-old Ellie from Lancaster University also felt the same way about the armed forces. “I think the armed forces make people proud to be British as it is inspiring to think that there are people who are willing to risk their lives for the safety of their country,” she said.

Matt, a student at Nottingham University, thought that the Armed Forces offered a great example for young people in Britain to follow. “They illustrate a strong work ethic, a discipline and determination that many Britons have and they are incredibly proud of that.”

But beyond their work ethic, young people should also take example from their relationships with one another and how they conduct themselves, he thought.

“They demonstrate the comradeship felt among the people of our country and a natural, almost modest willingness to preserve our way of life. They are unobtrusive and humble in the sense that they endure, they carry out their tasks with great efficiency and pride, an admirable quality that many young Britons have and try to abide by in their daily lives. Yet they are also amicable with a great sense of humour, and in that sense they are very down to earth. These qualities, among many others, make them the role models for our nation in the eyes of many young people today.”

The strong opinion of the group was summed up by 20 year-old Sam, from Loughborough University, who said, for him, the reputation of the Armed Forces “creates the idea of the everyday hero”.

Sarah Cottam is a student at Loughborough University, and a regular blogger for British Future.