An England for all of us 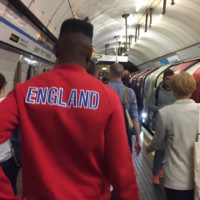 Nine in ten people in England now agree that being English is not about colour, according to new research published today.

The numbers who still think that ethnicity is an important factor in being English has halved since 2012. Even seven years ago it was a minority view – but new attitudes data shows how that minority has shrunk yet further. The new survey of English residents, conducted by the Centre for English Identity and Politics at Winchester University, repeats  2012 British Future research. It finds that overall, just 12% of people in England see being white as important, down from 21% seven years ago.

The change has mainly been driven by shifting attitudes among older people: just 16% of over-65s today think whiteness is an important part of being English, compared to 35% who said so in 2012, when British Future first tested public opinion on these questions.

The new data challenges the widespread assumption that the 2016 Brexit vote either reflected or has caused a sharp increase in a racist or xenophobic English identity. English-identifying voters were significantly more likely vote Brexit, but the survey suggests that the Brexit vote took place at the same time as English identity was becoming more rather than less inclusive.

The diversity of England’s sports teams may well be a factor in shifting perceptions of what it means to be English – sport is one of the few outlets through which people express their English identity.  British Future Director Sunder Katwala, speaking to the Observer, said:

“An inclusive England may be symbolised by Raheem Sterling or Nikita Parris scoring goals for England or Moeen Ali taking wickets in the World Cup, but it also reflects the lived reality of who most of us now think of as English.

“There has been an important generational shift in how we think about England and the English. There has been no doubt that most people who migrated to England, like my parents, usually felt they were invited to become British but not often to identify as English too. An increasing number of their children, born in England, have felt they can choose to identify as English as well as British.”

While the association of Englishness with whiteness has halved over the past seven years, there has been less marked change in other signifiers of English identity. ‘Being born in England’, ‘paying taxes in England’ and ‘contributing to English society’ are seen as important by over 70% of the population. However, while seven years ago a clear majority thought it was important for your parents to have been born in England (56% agree vs 41% disagree), today’s views are more balanced (48% agree vs. 45% disagree).

“This new survey challenges ideas that Englishness is widely seen as an ethnic identity either amongst English residents as a whole or those who emphasise their English identity.

“On the other hand, the idea that being English is strongly associated with ideas of belonging in England through being born here or contributing positively to society remains highly valued.

“This points to the evolution of an Englishness that is both rooted in England but is open to all ethnicities.”

The shift in attitudes has been greatest among those feel their English identity more strongly. In the new survey 27% of respondents identified themselves at ‘More English than British’: among this group there remains a stronger association of Englishness with ethnicity, with 17% saying that it is important – but that represents an even sharper decline from 2012, when 29% of the ‘More English than British’ group felt ethnicity was important.

The new survey points to the evolution of an Englishness that is open to people from all ethnic backgrounds – with the principles of belonging, through being born here or contributing positively to society, remaining highly valued. Moreover, it shows a public rejection of those who have tried to assert an English identity that is exclusively white. Sunder Katwala said:

“This significant further shift in attitudes since 2012 suggests that the champions of a narrow, exclusive and closed English identity are being much less successful than their liberal opponents fear. The EDL came to public attention around 2011-12. For all of the media profile and notoriety of Tommy Robinson, and his activities in mobilising a vocal, angry and toxic minority in street and online protests, he has been losing the public argument. These research findings suggest that the public response to the assertion of an exclusionary Englishness has been to strengthen the fair-minded majority which recognises that Englishness is stronger when it welcomes everybody in England who wants to belong to it.”

That is no reason for complacency. The further development of an inclusive Englishness would benefit from positive engagement by leaders across the political spectrum, encouraging ethnic minority citizens in England to see English identity as open to them. But it is welcome, all the same, that at a time when our society can feel more divided, Englishness has in fact become more inclusive.

As England’s Lionesses take to the field for the Women’s World Cup semi-finals tonight, our multi-ethnic team will belong to all of us.