Brexit is a ‘reset moment’ for immigration policy in Britain and the issue will be at the heart of the Brexit debate, so it was an appropriate theme for the first of British Future’s fringe meetings at the Conservative party conference in Manchester, co-hosted by ConservativeHome.

Sunder Katwala, Director of British Future, said that the referendum was a ‘vote of no confidence’ in how governments had managed migration over the past 15 years, though mistrust of governments did not mean that most people were hostile to those who had come to live in Britain.

South Thanet MP Craig Mackinlay said that the loss of public confidence reflected an immigration system in which – ‘we don’t really know what is going on’ – and that most people made a contrast between scepticism about how governments had handled the issue and the people they knew, who had come to live and work in Britain.

Mackinlay argued that the next phase of the Brexit debate needed to better reflect the balances between the positive contribution of migration and the pressures of the high pace of migration. “I have never been in favour of a numerical target,” he told a packed ConservativeHome marquee, arguing that the government could revisit its approach to targeting net migration so as to combine controls on migration with the practical flexibility to meet the needs of the economy at different times. 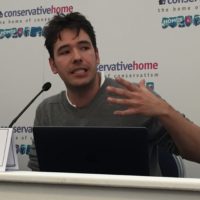 Henry Newman, co-director of Open Europe, said that public attitudes were nuanced on immigration. Open Europe’s research found that people saw both the pressures and the gains that it can bring to Britain. “We can construct an immigration system that has public consent,” he told the meeting. What the public wants, he suggested, was a system of controls to manage migration, together with strategies to address welfare dependency and to develop jobs and skills.

Opening the meeting, Sunder Katwala said that those who believed in the benefits of migration needed to understand the need for change after Brexit. He set out five key principles that could provide the foundations for immigration reforms which would rebuild public confidence and consent in the positive contribution that well-managed immigration could make to Britain:

1.Decency
It is essential to separate the future from the past. There will be future policy changes but what should not change is the ability of Europeans already living in Britain, and British citizens in the EU, to carry on with their lives.  While the basic principle had almost universal support, the delay in securing people’s status, and pinning down the details, has caused much anxiety.

Both sides have agreed this should be the first issue in the negotiations, because of the importance of giving certainty to those directly affected. It is essential that the UK and EU27 governments could guarantee that a deal would stick, whatever then happens in the broader Article 50 negotiations. It would hardly deliver the reassurance needed if people were told there was a deal before Christmas, but that they would have to wait another 18 months until March 2019 to find out the status of the deal.

2. Change
There had been an opportunity to attempt reforms of free movement within the European Union, during David Cameron’s renegotiation in 2016. After the referendum, proposals for minor tweaks to free movement, such as applying the existing rules more rigorously, or renegotiating free movement so that it was subject to a job offer, were unlikely to meet expectations.

3. Welcoming skills
If the government wanted to design an immigration system that would secure public confidence, it would move away from a one-size-fits-all immigration target, towards an immigration framework that recognised the differences between different migration flows.

This would reflect the broad public consensus, across the referendum and political divides, for remaining open to skilled migration, alongside more control over the scale and pace of low-skilled migration. A system which met that desire for control could also unlock pragmatic support for low and semi-skilled migration, for particular jobs and roles, within a managed system. It would also assess the right balance between developing home-grown skills and bringing in workers needed from abroad.

4. Democratic engagement
The 2016 referendum should not be the end of public engagement in immigration choices after Brexit. There needs to be credible and visible public engagement in immigration choices, so citizens can see how the cross-pressures and trade-offs about the pressures and gains of immigration were reflected in the government’s policy choices. The National Conversation on Immigration, which is visiting 60 towns and cities across all nations and regions of the UK, offers a model which the national government could seek to develop and institutionalise. Local and regional engagement could help to articulate and balance the perspectives of employers and health services on the needs for migration with community concerns about how the pressures are managed.

Public engagement could also be linked to an annual focal point in the House of Commons – analogous to the Chancellor’s budget – so that there was a much more transparent and visible framework for democratic accountability about the choices that government was making.

5. Making integration matter
While much of the immigration debate is about the needs of the economy, integration is arguably the most important question in the immigration debate.
“When a society is confident about how integration has gone so far, there will be consent for immigration. If integration isn’t working, that will be much harder,” he said.
Britain had a ‘not too bad’ record on integration, Katwala said. “We are doing better than France – but that is too low a bar. We have never yet had a proper integration strategy and we need one,” he added. Key areas of focus should include fluency in the English language as an essential foundation for integration – and promoting citizenship to those who wanted it, including facilitating this during the process of registering 3 million Europeans settled in Britain. 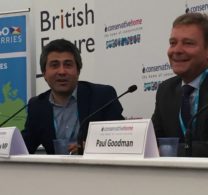 Craig Mackinlay wanted to see a separation of international students from immigration debate and policy.

“Students are a great export,” he said. “We need to boost exports. We should be getting right around the world encouraging more people to come here.”

The sense of a broad political consensus on this was strengthened by a contribution from the floor from Alp Mehmet of Migration Watch, who said that “there are no limits for international students and long may that continue.”

The panel debated whether the post-Brexit system would have identical rules for EU and non-EU migration, or whether a new system for European migration might be negotiated during Brexit.

“As a pure Brexiteer, I find the idea of a preference for Europeans difficult, but it will depend on the overall negotiation,” Mackinlay said, adding that he was attracted by the idea of ‘Commonwealth preference’ in a future post-Brexit migration policy.

Katwala argued that there would always be different rules for some different countries or regions, and that a framework could be more open to both EU and non-EU skills within a managed and controlled system.

“We would never say that you can only make a trade deal with one country if you make the same deal with every country,” he argued. “On immigration, whether it is with the USA or Commonwealth countries, or with the EU, the Government should be able to make the deals that are in our interests – just as long as they have the political and public consent for the migration that is involved in that deal.”