A call for perspective on the Calais crisis 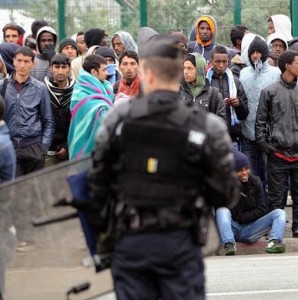 It is a curious thing when someone of a centre-right disposition, with similarly right-of-centre views on immigration, has cause to rail against the right-wing press, writes Drew Smith.

However, speaking as someone whose role of late has been consumed by the migrant crisis in Calais, I have seen first-hand, and been alarmed by, the pervasive ignorance of the situation. The public, it seems, are suffering from something I’ve dubbed ‘Little England Syndrome’.

Don’t get me wrong: until recently I lived in Folkestone, site of the Channel Tunnel entrance, and I’ve been as alarmed as anyone by the ease with which migrants have gained illegal access to the ostensibly secure site. The migrants in Calais have no right to come to the UK; either because they are economic migrants or because, under the Dublin Regulation, those with legitimate asylum claims should have them processed in the first state they reach. For those in Calais this is clearly not the UK (it is less well-known that the majority of refugees entering Britain do so through our airports, often with fake documentation). As such, and in spite of my sympathy for the migrants on a human level, I no more want to see them succeed in their journey than is the prevailing norm.

That said, there seems to be very little appreciation that the bigger picture is one in which the world is struggling with its largest refugee crisis since the Second World War. Never mind the catastrophic scale of the tumult afflicting countries such as Syria, Afghanistan, Eritrea and Iraq, some of which we share varying degrees of responsibility for; the discourse in certain parts of Britain, fuelled by Daily Express headlines such as “Send in army to halt migrant invasion” and “Ebola threat reaching UK shores” is one of pure, unabashed British self-interest. This focus on how ‘they’ will all be stealing our jobs, houses and hospital beds, while frolicking with taxpayer-funded handouts, means the wider realities, facts and tragedy are often sadly overlooked.

The Daily Express’ Leo Mckinstry wrote recently that Britain “could become like Africa” and denounced those “who trumpet immigration” as colluders in “the destruction of our great nation”. Clearly this is ridiculous hyperbole, but if every migrant seeking asylum or a better life in Europe was destined for Britain perhaps I might share his fears. The thing is though, they aren’t. Just because migrants interviewed in Calais describe reaching the UK as “their dream” doesn’t mean that’s indicative of the broader pan-European experience. The downtrodden inhabitants of ‘the Jungle’ in Calais make up a tiny fragment (between 1 and 2%) of the more than 200,000 illegal immigrants who have landed on Greek and Italian beaches this year alone. In spite of this influx, numbers in Calais have remained stubborn at around 4,000. It is clear then that not everyone who makes it to Europe heads straight to Calais, motivated by a shared desire to benefit from our “generous welfare system” as Nigel Farage and some sections of the press would have us believe.

Of the 357,000 asylum applications made in Europe last year, just 7% (26,000) were made in the UK. Of those, 10,500 were accepted. For perspective – severely lacking in some quarters – that equates to 0.01% of our population size. Migrants making it across the Mediterranean have been far more likely to head to Sweden and Germany where, in the latter’s case, six times as many people claimed refugee status in 2014. Per head of population, asylum seekers are four times as likely to succeed in their applications in Sweden. Even the much-maligned French took in more than twice our number last year. Perversely, none of these facts appear much appreciated or widely aired.

Even so, at a time when Britain faces problems of its own, we shouldn’t be taking in more of the world’s downtrodden – right? I’d beg to differ. According to Britain’s Refugee Council, the number of refugees in the UK has fallen by 76,439 since 2011. Compare this with Lebanon where an influx of Syrian refugees has swelled the population by a quarter since then and Turkey, the new home to 1.8 million refugees, and it is clear that by no appreciable measure is Britain on the front-line of Europe’s migrant crisis. However with newspaper headlines like “Migrants are stealing our washing” and “Two days to save Dover” is it any wonder that this is far from known?

There is still pride in our country’s tradition of offering people a place of safety, particularly among younger Britons. A YouGov poll released in June found that more than eight out of ten first time voters at the General Election felt this was something the nation should be proud of. Three quarters wanted Britain to maintain its role as a safe place for people fleeing war, violence and persecution. “Generation Welcome”, as they have been named, could provide the government with cover to take on a larger role. Those who have seemingly come down with a case of ‘Little England Syndrome’ this summer may, however, take more persuading.

The Germans are proud of being the EU state that is home to the largest number of refugees. Without the pernicious influence of some sections of the media, perhaps we British would enjoy a bit more perspective on the humanitarian crisis our continent is facing.

Like the migrants in Calais, all one can do is hope.

Drew Smith is a parliamentary aide to Damian Collins, Member of Parliament for Folkestone and Hythe (home to the entrance to the Channel Tunnel). He has spent the summer working on the response to the migrant crisis in Calais, which came to a head following the imposition of Operation Stack. Prior to entering politics, Drew studied International Law and Security at Georgetown University, focusing his thesis on the civil wars in Syria and Lebanon. The views expressed in this blog are Drew’s personal views only, not those of his employer.