From Minority Vote to Majority Challenge 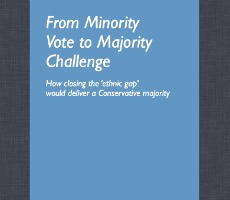 In our report, From Minority Vote to Majority Challenge, we present research conducted for ConservativeHome which reveals how differently the 2010 election could have unfolded if the Conservative Party had courted the secured stronger support from ethnic minority voters.

While the election projections themselves are just that – projections –  the report’s conclusions highlight the importance of the minority vote both historically and for future general elections.

According to the report David Cameron could have secured an extra 500,000 votes and formed a majority government in 2010 if he had appealed to ethnic minority voters. Winning 36% of voters across the UK, only 16% of those were from minority backgrounds during the election. Meanwhile Labour secured 68% of the ethnic minority vote and the Liberal Democrats got 14%.

Also in the report is evidence to show that if the 1992 John Major election was re-run, his party would have failed to win if the British electorate looked the way it does today.

Read From Minority Vote to Majority Challenge in full here.