Tackling the question of Welsh pride in rugby 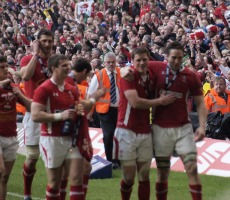 There are many things people think of when they hear the name Wales. Mountains, singing, sheep, leeks, harps and, of course, rugby. I myself am from Wales and I definitely see rugby as somehow particularly Welsh. But is this merely a stereotypical view of this little country or are there some intrinsic elements of national pride and identity locked inside the sport? writes Bryn Lewis.

It’s currently Six Nations time in the world and rugby is on the agenda – and TV – in public houses across the country. The first time I became aware of this massive event in the calendar was upon hearing rousing songs bellowing out into the street.

While drunken frivolity is the expected outcome of most major sporting events where I come from, this had a different tone. It was joyous even in defeat and displayed friendship between supporters, even between those from different teams. Maybe herein lies the link, something about what makes rugby unique and what makes it so suited to the Welsh as a people.

To begin then, I must unfortunately debunk the widely held belief that everybody from Wales is not only a huge rugby fan, but also superhumanly good at playing it. Since school I’ve never even held a rugby ball and the rules are beyond me.

However, this needn’t necessarily stop rugby from being very Welsh. Being able to play a sport, or even understand it, does not stop a certain sport from becoming a focus of pride for a nation. Some might say that how we feel about the sport might be derived from the singular fact that it’s a sport we might win at some point, but this would seem unfair on players of other sports in Wales.

Perhaps rugby is a historical cultural construct. My grandfather was a rugby fan and he too was Welsh. This sense of heritage makes it feel Welsh. However, while this idea may have merit, it doesn’t even begin to explain the underlying resonance of the sport with the people.

Maybe then it is Wales itself that is so well suited to the sport, a land of crumbling castles and Celts. The idea of friendly competition has always blossomed on this soil and national pride is a focus of our culture. Our language, our freedom, our team? Rugby is a physically gruelling sport about overcoming your adversary with skill and grit. It is about physically pushing back your opponents until you stand triumphant. This seems like an idea that would easily find root in the hearts of the Welsh. That this can somehow be harnessed into a friendly challenge only adds to its allure.

To be a good footballer nowadays one has to be proficient not only in football itself, but in media skills, in PR and in your ability to ignore the general taunts of your opposition. To be a good rugby player, one merely has to be good at playing the game. This sense of inclusiveness, from playing in school with friends all the way up to the professional level, is heartening and suits the Welsh to a tee.

So why is rugby a national symbol of Wales? Because it shows some of the traits which we pride ourselves on and is therefore something in which we take pride. This could be why the sport is so well received in the land of mountains and music.

Now if only poetry, another Welsh tradition, was so amply rewarded and well received by the media in Wales. I can always dream.

Bryn Lewis, 23,  lives in north Wales and is a youth worker with the Bangor Youth Group, and is one of British Future’s Next Generation bloggers.