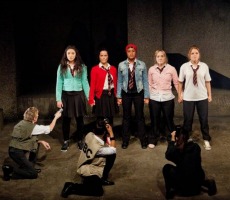 You know how it is with Brits and standing ovations. They just don’t feel it is right. There’s that moment at the end of a play, when some over enthusiastic people start to jump to their feet, and the rest of the audience mutters. But the audience at Theatre Royal Stratford East were having nothing to do with such mild mannered niceties, writes Rachael Jolley.

After the performance of the National Theatre of Scotland’s Glasgow Girls last Friday, they jumped to their feet and roared their approval and wouldn’t stop. The cast looked slightly stunned by the audience’s reaction, but it was a reflection of a truly exciting musical play.

This  production came to Stratford after a run in Scotland where it got rave reviews, and is no doubt about to get booked for another run somewhere soon.

Events are based around real stories about a Scottish school which admits some refugees as students, and what happens next.

It’s a dramatic tale told through songs and dialogue. The lyrics have a freshness and directness to them that cuts through all of that potential naffness, added to which is a fair bit of unexpected comedy, as well as lashings of Scottish in-jokes. All the action takes place against the backdrop of a grey, looming block of flats, which turns itself into various homes as the action moves on.

The most incredible thing is the energy of the actors playing the seven teenage girls, a group of friends at Drumchapel High School who formed a group made up of refugees and locals, and who fought for their friends to be released once the officials from the UK Border Agency knocked on their doors and ghosted them away.

Teachers and other adults are played magnificently by Callum Cuthbertson, who is mainly on stage as the girls’ teacher, and Myra McFadyen, who had a wonderful way with a comic line, and played the leader of the local women in the flats, as well as the headmaster, and could make the audience collapse into giggles in seconds.

The play had an agit-prop feel, which felt appropriate in the former home of  Joan Littlewood’s Theatre Workshop. The UKBA officers were roughly drawn, in dark uniforms, and with a rather one-dimensional nastiness that would have undermined the play if it was a lesser piece of writing. But no one could fail to be engaged by the six young actors, who jumped, sang and dance like there was no tomorrow, with energy that filled the theatre and took the roof all the way off.