Liberals should not be uneasy about Englishness

The most surprising aspect of David Edgar’s engaged but sceptical take on the Festival of Englishness hosted by British Future and IPPR is his fear that anxious public debates about immigration may reinforce “the idea that deep down, there still ain’t no black in the union jack,” writes Sunder Katwala. 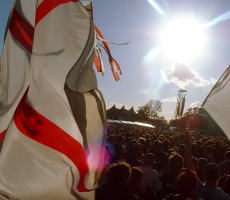 The question of whether you could be British and black did seem a difficult one for many people when I was a teenager. But the old, defunct National Front lost that argument about 20 years before our Olympic summer of 2012. In the 2011 census, seven out of 10 ethnic minority respondents chose “British” as their national identity. Only 29% of white respondents ticked that box, most choosing “English”. If ethnic minority Britons were to become the only ones still left rallying around the British flag, might we risk reaching the point where there is only black in the union jack?

For a vocal minority, this rising Englishness is driven by grievances: anti-Europe, anti-Scotland, anti-immigration, anti-Muslim, as Edgar notes. Yet for many more, it isn’t. Rather, a simple sense of fairness suggests that the English also expect to have their say in the decisions we make about our multi-national UK.

Edgar is “queasy” about an Englishness that is so sharply contested by “vocal factions of English Democrats and Campaign for an English Parliament,” though, as he points out, the question of “which England is being talked about” has reverberated down the centuries – between “deep England” and “radical England”, the rural and urban, the insular and the global.

Edgar talks of “the growing divisions within England itself.” Even if true, is that a reason to avoid this conversation, or to contest it again? In 2014, a probable Ukip European election victory, the World Cup, the Commonwealth Games and the Scottish referendum will bring forward many different ideas about England’s present and its possible futures.

Some would find it more comfortable to reshape national identities without the baggage of flags and national days. Yet only by engaging with such potent symbols do we ratify shared understandings of the people we now are. It could be far more effective than the local multicultural festivals which, however good their intentions, often fail to bring together those who know each other least. If cultural recognition is important to minorities, it must matter to majorities too. That’s why we need a confident, civic national identity we can all share.

Could liberals learn to stop worrying so much about a flag? When we asked people why they believe St George’s Day isn’t celebrated more, most hoped it would be, but blamed the lack of a bank holiday. One in three white respondents did cite the “fear of upsetting minorities,” but ethnic minorities just couldn’t see why. In fact, our poll found the non-white English four times more likely to want to see the St George’s flag flown than not.

Celebrating St George’s Day properly, and making sure everyone feels invited, could make it a day to bring England together. We should make it happen. It would be a shame for Edgar, a great English playwright, to feel unease about joining the party given that 23rd April is Shakespeare’s birthday too. Maybe he’ll join us in Stratford next spring?

This article has been modified for British Future. It originally appeared on the Guardian here.