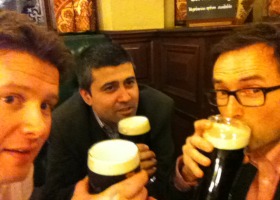 As St Patrick’s Day celebrations around the world show, there’s no reason why celebrating a patron saint can’t be an inclusive event to which everyone’s invited.  The liberal left should be less anxious about Englishness and more openly proud of the modern English nation that embraces people of all creeds and colours.

British Future, who have joined in the celebrations for St Patrick’s Day this year, are calling on England’s pubs and local authorities to get behind St George’s Day and give it the same prominence. British Future director Sunder Katwala says:

“Poor St George hardly gets a look-in come 23rd April. Pubs and local authorities that are putting on events for St Patrick’s Day should do the same for England’s patron saint too.”

If pub owners are wondering whether there is an appetite for such events, the answer is yes. ICM research for British Future shows that three-quarters of the public (76%) want St George’s Day celebrated more or at least as much as St Patrick’s Day.

According to the poll, two-thirds (66%) of people in England feel that the Irish saint’s day is more widely celebrated in Britain than St George’s Day, with only 7% believing that St George gets more attention. The English are keen, however, to celebrate their national identity more. Nearly two-thirds (61%) feel the flag of St George should be flown more widely across England. And a day off would also be welcomed, with four in 10 (41%) citing the lack of a bank holiday when asked why St George’s Day isn’t celebrated more, as against a minority of 29% who believe it is because people don’t care.

This data reflects a rise in an inclusive, more prominent English identity. People in England are now twice as likely to say they are more English than British than the other way round.

“Some liberals still worry that the St George’s flag is perceived as racist but they need to get over this and join in the party. Most people would like to see the flag of St George flown more often and most ethnic minorities would be happy to get on board too. We should invite everyone along to celebrate,” says Sunder. He adds:

“We saw how the whole country got behind Team GB at the Olympics and the jubilee. We should do this in England every April. And with the World Cup squad heading out to Brazil just seven weeks later, there’s no reason we can’t keep the flags flying right through to kick-off on 14th June.”