What Watford thinks of their golden boy

People in Watford were beaming with pride today about their newly painted gold postbox, a symbol of the success, recognising fellow Watfordian Anthony Joshua’s super-heavyweight boxing Olympic gold medal. Following the 22-year-old’s victory on the final day of the Olympics, workmen arrived to paint the postbox on Watford High Street gold on the following Monday morning, to provide a lasting reminder of the Watfordian’s Olympic achievements, writes Binita Mehta.

I spoke to a few Watford residents to ask what the Olympics meant to them, and what they thought of Joshua’s heroic achievement. 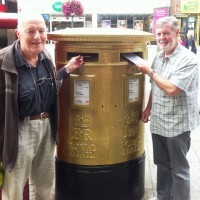 John Bennett, who was posting a letter into the gold postbox, said the Olympics were “a hell of a thing to see” and particularly enjoyed watching them on a big screen with his daughter at Brent Cross shopping centre. He said “though I am not a flag-waving nationalist, I am certainly a patriot.” He felt even prouder to be from Watford and his country due to the numerous medals our Team GB athletes won.

Terry Hayes was keen to share that his son went to the same school as gold medal winner Joshua, and felt very proud; the Olympic champion “is a local boy, and it’s nice to see him doing so well.”

Brothers Tom and Jake Harvison, aged five and eight, were really excited about Joshua’s medal and the gold postbox, saying that they have been inspired to get involved in loads of sports, especially boxing and weightlifting due to the Olympics, even keen to know what the minimum age to enter the Olympics was.

Poppy Moss, aged eight, said she felt inspired to start diving, as her favourite Olympic moment was Tom Daley winning his bronze medal. She said she was really proud of Anthony Joshua from Watford and also another Watfordian Geri Halliwell performing with the Spice Girls in the closing ceremony.

Roshni Devlukia, who works in Watford General Hospital, said that stars like Joshua are a “credit to their town and role models to the youth of today.”

As a Watfordian myself, it’s fantastic to see a fellow young Watfordian become an Olympic champion. The gold postbox and stamps bearing his image are a long-lasting reminder of his success as well as an inspiration for residents.