Peckham has not always enjoyed the best reputation, often being associated with Del Boy, Damilola Taylor and destitution. In the show Peckham Finishing School For Girls, the area was presented as a sprawling, inner-city nightmare where people ought to wear bulletproof vests upon visiting. But this reputation conceals some of the area’s more positive elements, elements that Nicholas Okwulu wishes to highlight through organising The Big Lunch in Peckham, writes Jemimah Steinfeld.

“I’m a person who believes in communities and having local people solve local problems. When we pulled off the first BigLunch, it was great to see people come together and do it themselves,” gushed Okwulu, who has organised two Big Lunches prior to this year. 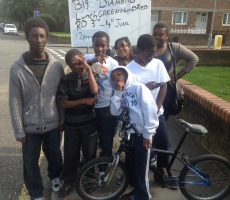 “You get to know your neighbours, to talk to people and to see what skills they have. After we did The Big Lunch last year, we found all these hidden resources on our doorstep,” he added.

One problem that Okwulu identified when he first became involved was that people within his community did not know what level of responsibility they could hold. They would rely on external agencies to solve local problems.

“I think one of the nice things about the Big Lunch last year was seeing a wealth of people come together for one cause. It’s a very diverse ward. People form all walks of life live here. I moved here about 20 years ago. It has its ups and downs, but generally it’s getting better and becoming a more cohesive community since the Big Lunch and the visit to Livesey ward by the Duke and Duchess of Cornwall.”

The Big Lunch aims to gather people from across the UK to have lunch with their neighbours once a year. Since starting in 2009, thousands of Big Lunches have taken place in all types of communities across the UK. This year Peckham will host three Big Lunch events over two days. Okwulu himself is the perfect person to be involved. As a Community Enabler for People Empowering People, who also sits on numerous steering groups within the borough of Southwark Council, Okwulu works closely with local groups and organisations and understands the importance of empowering communities.

So how does he aim to bring people together this year? Food is central of course, being a great way to break down boundaries as people come together and feast on food from different cultures. Okwulu himself says that until The BigLunch he would not ordinarily eat quiche, but a neighbour brought it and so they bonded over the pastry.

But food is just a starting point. Okwulu looks at various ways to develop the community from there. For example, he was approached by a handful of boys from an Afro-Caribbean background, who said they liked jollof rice yet didn’t get to eat it very much. Okwulu approached the caterer of a local nursery, who is of Nigerian descent.  The Big Lunch has given her some money to cook jollof rice on the condition that she teaches the boys how to make it and in return they help out on the day. “It’s great when you see like-minded people coming together,” he explains.

In another initiative, five estates are hoping to organise an inter-estate competition. This will encourage local estate leaders to bring out as many people as possible.

“Polish, Spanish and Irish all turn up. We even have local travellers, who we are trying to get involved so that people cannot say, ‘We live here and they live there.’ Having that social interaction is really important as people start communicating.”

Even though there have only been two Big Lunches so far, the effect they have had on Peckham is palpable. “People are a lot friendlier now. I’m not saying they weren’t friendly before, but now people interact more, they stop on the street and say how they remember you from last year.”

Click here for more information on The Big Lunch.

Jemimah Steinfeld is a freelance journalist living in London.