How will Scottish referendum outcome affect feelings of national identity? 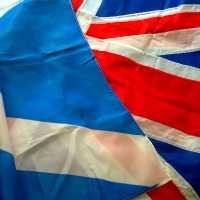 Photo: The Laird of Oldham

The referendum on Scottish independence will be a major political event in the UK in 2014, with potential long-term constitutional ramifications. Yet the relationships and bonds between people from different parts of the UK are unlikely to be hugely affected regardless of the outcome of the vote, writes Mark Diffley.

Ipsos MORI’s new poll for British Future shows that most Scots (61%) will still feel British, while 70% will not regard English people as foreign even if Scotland does vote for independence. For their part, only around one in five people (19%) from the rest of the UK believe being British will feel ‘less special’ and only 14% will regard Scots as foreign if Scotland votes ‘Yes’ in 2014.

This research will be important for both sides of the constitutional divide at the beginning of a vital year in which they try to win the hearts and minds of Scottish voters ahead of the referendum. While previous Ipsos MORI polling shows that economic issues will be the key factor in determining how most will vote in the referendum, issues of national identity and relationships between different parts of the UK will still figure significantly.

The fact that feelings of national identity and views of near neighbours appear to transcend the constitutional position of Scotland has elements of good news for both camps. For nationalists, it reinforces their view that the ‘social union ‘ between Scotland and the rest of the UK will continue undiminished, retaining what the First Minister called the ‘British connection’, even if Scotland votes to end Westminster rule.

According to the poll, even some Scots who support independence do not envisage huge changes in national identity and bonds with neighbours in the UK, perhaps signifying that people generally do not view serious threats to links between Scotland and the rest of the UK regardless of the referendum outcome.

Other Ipsos MORI polling in Scotland has shown strong links between national identity and voting intention in the referendum, with those who consider themselves as exclusively Scottish more likely to vote ‘Yes’, while those who consider themselves equally British and Scottish more likely to vote ‘No’. Those who are campaigning against independence will hope that the strong British identity remains in the lead-up to 2014 and that this translates into a decisive ‘No’ vote.

So, although it is economic issues that are likely to influence voters most significantly, these issues of identity and relations with the rest of the UK are of some importance. If the ‘Yes’ campaign can capture feelings of ‘Scottishness’ in 2014 as successfully as feelings of ‘Britishness’ were captured during 2012 through the jubilee and the Olympics then the referendum may be closer than the current polls suggest.