As a single white man in my twenties, going to see a play about four mothers dealing with their children, relationships and mixed race families was not something I thought I was going to relate to. But thanks to a healthy injection of humour and some sharp social commentary about the UK in general, Adult Supervision had myself and everyone else in the audience engrossed and laughing from start to finish, writes Douglas Jefferson. 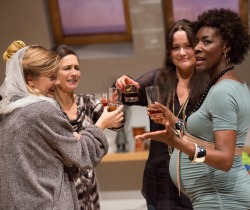 Set on the US election night 2008, the moment Obama sealed his place in history as the first African-American president of the United States, four middle-class mums in the UK have left their partners with the children as they decide to have something of a party. Our host Natasha (Susannah Doyle) has been very attentive in preparing printout scorecards for them to follow the action, and special “Obamatini” cocktails for all to enjoy. After all, this is a chance to celebrate the African culture of her two little adopted children. Enter Izzy (Olivia Poulet) who thinks it is a pyjama party, Mo (Amy Robins) relishing the chance to enjoy a few drinks and a heavily pregnant Angela (Jacqueline Boatswain), who is enjoying the excuse for a night away from her kids.

Prim and proper Natasha is not going to get the evening she expected. Instead of balanced scorecards tracking Obama’s victory surge across the northwest coast, truth or dare becomes the game as – powered by a fair amount of Obamatinis – their social guards are dropped little by little, allowing discussion of what this night is really about; race. As Mo, the most open and honest of the group, says:

“Natasha darling, that is what tonight is about. You brought us here because you suddenly noticed your social circle was one big white-out, which you hadn’t really thought about before picking up those kiddies in Africa.”

Race is something we are becoming far more comfortable talking about in this country. It is increasingly seen as a non-issue, with young people in particular confused as to why anyone should be bringing this up in the first place. However, that is not to say the UK is completely integrated and in Adult Supervision it is certainly the elephant in the room, even for these mothers of mixed-race children. A lot of the humour in this play comes directly from everyone’s desire to appear comfortable with race, when generally they feel the opposite. Izzy, for example, is so at pains to make clear she is not racist that she is scared to use the word ‘exotic’, ‘mixed race’ or even ‘bio-racial’.

The script manages to explore these hard-hitting issues while keeping the laughs coming as the party continues going downhill at breakneck speed and disaster begets disaster. When there are interludes of a more dramatic nature, where the characters reveal their personal problems, these are explored quickly before the comedy returns. It’s a fine balance, but it works.

The only minor criticism is the slightly weak casting of Angela, though perhaps this was due to the weight put on her role. And this did little to detract from a play full of talent. By the time dawn is breaking and Obama is being announced as president, our four mothers have lost complete track of what is happening in America having undergone a journey of their own, and an enthusiastic audience is more than willing to give them all a fully deserved standing ovation.

Adult Supervision by Sarah Rutherford is playing from now until 3rd November at London’s Park Theatre.