Remembering the contributions of the Anglo-Irish

A lover of Iris Murdoch novels, I noticed recently that in my faded 1960s paperbacks her author’s biography proudly boasts of Anglo-Irish parentage. Perhaps her publisher wanted to emphasise a background evocative of literary greats, from Jonathan Swift to Samuel Beckett? That hyphenated identity, Yeats’ “no petty people”, dominated public life in Ireland for centuries. But today, are they still a people at all asks Paul Evans.

A fortnight ago I joined my uncle (incidentally, the source of my paperbacks) at a memorial event celebrating the life of a cousin by marriage, a man I knew only from anecdotes. His name was Richard Hutchins, known as Dick. He was born in 1915, into an Irish Protestant family of English descent. Hearing about his life felt like sailing around several centuries of shared history. 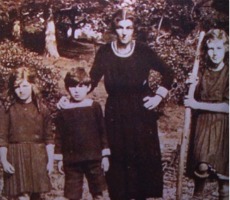 Dick with his mother and two sisters, shortly before they left Ireland. Despite being minor gentry, things had obviously got quite tough, as they’re wearing home-made clothes.

Dick’s infancy was spent at a place called Ardnagashel in County Cork, an estate on Bantry Bay rich in flora tended by his ancestors, among them the noted botanist Ellen Hutchins. Another antecedent was a friend of Wolfe Tone, the revolutionary who tried and failed to end British rule in Ireland, with the assistance of the French Navy.

His father, an officer with the Royal Munster Fusiliers, died weeks after his birth. The coming years were bloody for Ireland. With the head-of-the-household dead, and as the Irish War of Independence grew more violent, it was increasingly unsafe as an Anglo-Irish family, even one which enjoyed good relations with their neighbours. In 1921 Dick, his two sisters and his mother left Ardnagashel and Ireland behind, initially for the Isle of Wight. In a sense, they were immigrants to their own mother country.

Growing up in England, Dick came to lead a full and generous life. He joined the Ramblers on their foundation in 1935; was a life-long advocate of universal access to the countryside; rose to the rank of Lieutenant-Colonel during World War II; played a leading role in the creation of Bracknell new town; established an outdoor activity centre and contributed a great deal to civic life right into his nineties.

Dick’s family were not untypical of southern Irish Anglicans in having left during the dangerous years when both the IRA and Black & Tans were committing horrors across Ireland, not least in the rebel county. Some families settled permanently in Britain. Others held fast, or later returned to make their home in the Republic.

The Anglo-Irish poet Elizabeth Bowen once wrote of feeling not quite at home in either country – and it seemed that Dick Hutchins carried a little unease about being regarded as somehow responsible for the social position of his ancestors. Yet speaking with Dick’s daughter Madeline, it seemed that by the end of his life at least, he was a man relatively at ease in his identity: both obviously English and immensely proud of his Irish heritage.

Late in his life and as a widower, Dick returned to live in the Republic of Ireland. The beautiful house in which he was born had become a hotel, sadly destroyed by fire in the 1960s, so Dick lived first in a caravan and then in a small house on the Ardnagashel estate. Until the very final months of his life he remained in the place he was born, enjoying an outdoor life devoted to the plants and trees that were his legacy.

The privileged position once enjoyed by the Anglo-Irish was unjust, but that doesn’t detract from the immense contribution that they made to both Irish and British society and culture, from Charles Parnell to Oscar Wilde. They were a distinct and confident people, though whether they remain so today is less clear. It feels as though the clearly identifiable community into which Dick was born is now all but disappeared. But like the thousands of migrant labourers who crossed the Irish Sea looking for a more prosperous future, they are part of centuries of cultural exchange – of the Englishness in Ireland and the Irishness in England.