“No hero will be forgotten” assures government amid controversy

As the first world war centenary approaches, how should we commemorate those who lost their lives in service of this country? It’s a question that has attracted some controversy of late, most recently with newspapers reporting that German diplomats have intervened regarding the tone of centenary commemorations in 2014. Even a seemingly uncontentious scheme from the government to honour Victoria Cross winners, with special commemorative paving stones in their local communities, has attracted criticism, writes Steve Ballinger.

“It is our duty to remember the British and Commonwealth troops who lost their lives fighting in the Great War and we are determined to make sure their bravery for King and Country is not forgotten.

“Laying paving stones to mark these Victoria Cross heroes will ensure that there is a permanent memorial to all the fallen who fought for our country.

“This will connect communities to their shared history, help residents understand how their area played its part in the Great War, and ensure memories of that sacrifice for British freedom and liberty are kept alive for generations to come.” 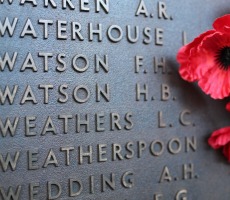 Lawrence Carthage Weathers VC (1890-1918) from New Zealand, was awarded the VC for gallantry at Peronne, France on 2 September 1918. He died of wounds on 29 September and was buried at Unicorn Cemetery, Vendhuille, France. Photo: Community History SA

But the scheme was restricted to VC winners born in the UK, excluding many servicemen who were rightly decorated for showing extreme courage and who have a strong local connection, but were born outside Britain.

Honouring some and not others, solely on the basis of where they were born, is arbitrary and has already provoked anger and upset in some communities whose members are shut out of the scheme.

Local campaigners in Devon have highlighted one such case, that of Sub-Lieutenant Reginald Warneford, who has local connections to Exmouth but born in India while his parents were on colonial service in Darjeeling. Sub-Lieutenant Warneford, nicknamed ‘Rex’, is something of a local hero, and with good reason.

His story reads like something from Boys’ Own. After only 12 flights, Warneford was recruited to a midnight bombing mission on the Zepellin sheds in occupied Belgium. Separated from the rest of the squadron after losing his bearings in the dark, he flew straight into the path of one of the airships over Bruges. Despite being armed with just a handgun, carbine and six bombs, he climbed above the Zepellin, cut his engines in order to dive within 200 metres of it, and dropped his bombs, destroying the Zepellin outright.

He was fated as a hero on his return and King George V personally awarded him the Victoria Cross. Tragically Rex was killed only weeks later.

I spoke to local military campaigner Lionel Howell, who organized a parade to honour Warneford in 1999 and ensured that his name is remembered in the town. He is outraged that Rex’s bravery might not be commemorated next year.

“The man was such a hero. King George himself came and met him off the train to give him his medal,” Lionel told me. “It shouldn’t matter where he was born. If they are going to leave Rex out, they should scrap the whole thing.”

The concern isn’t restricted to Devon, however. I spoke to one Victoria Cross expert who reckons there could be twenty similar cases. I’ve also heard from local campaigners up and down the country who feel the same as Lionel Howell – that it’s wrong to leave out their local war hero just because of where he was born.

British Future has written to Eric Pickles, urging him to reconsider the Rex Warneford case and ensure that those VC winners with significant local links in the UK are suitably commemorated.

Responding to claims that Commonwealth soldiers are not being recognised, the government released the following statement on Tuesday 20 August:

“The men who gave their lives in the Great War will remain heroes forever. The government will be setting out more of its plan to commemorate the 100th anniversary shortly. This will include the most appropriate way to commemorate Commonwealth Victoria Cross winners. No hero will be forgotten.”

Whether this will mark a change in how Commonwealth soldiers are commemorated has yet to be revealed. But the “who’s in and who’s out” controversy over the centenary commemoration of Victoria Cross winners has already brought to the surface questions about British national identity. When the government neglects to commemorate a serviceman who gave his life fighting for Britain, born in India but brought up in a town in England, there is an understandable uproar. Why not the same for the commonwealth servicemen who fought just as bravely, in the same battles, were awarded the same medals and, in some cases, have descendants living here?

Between 1914 and 1918, men from across the Empire signed up to fight in the war – 1.2 million men in fact – from Australia, Canada, Kenya and what is now India, Pakistan and Bangladesh. Polling for our recent report Do mention the war: Will 1914 matter in 2014? showed that 80% of people agree that children should be taught about this commonwealth contribution as part of the shared history of multi-ethnic Britain. Sadly when questioned, only 44% knew that Indian troops had fought alongside British troops. It’s clear that there exists both an appetite and a need for public education on the topic.

While shipping commemorative paving stones to the Punjab to honour Khudadad Khan and other Indian VC winners would only cause puzzlement in Pakistan and consternation among British taxpayers, the government does need to clarify how it proposes to honour the service of commonwealth soldiers.

That there is controversy and debate surrounding the 2014 centenary commemorations is not all bad. It highlights the importance of the first world war to our shared history and sense of national identity. And it helps to ensure that the event is brought to the attention of as wide a public as possible. The benefits of healthy debate will be of little consolation to campaigners in Exmouth, however. They would be the first to agree that commemorating the heroism of those awarded the Victoria Cross should be a question of bravery, not of birthplace.