My Leeds – Football, Identity and Belonging

Despite leaving when he was a toddler, Matthew Rhodes has a strong sense of being from Yorkshire. Below he explains why, and why he has always supported Leeds United.

Having lived in the Midlands, London, the South and in Yorkshire I am often asked where am I from.  As a Yorkshireman, born but only partially bred, now without a Northern accent, when asked where I’m from my answer is actually unequivocal: “I’m from Leeds”.

Both sides of my family are from South Leeds, going back three or four generations, with my Mum’s Irish Catholic forebears being the recent immigrants – my maternal great grandparents having come to England in the early 20th Century.  And my Leeds identity was affirmed every visit I made to my grandparents’ houses in Beeston, every Leeds United Football match I went to with my grandad, uncles, dad and brother and every time we had a large family gathering – which would always be in Leeds. 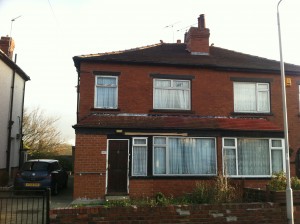 The house my Mum grew up in - Barkly Road, Beeston

This week I went to see my beloved Leeds United play Arsenal at The Emirates in 3rd round of the FA Cup.  It was my first time in Arsenal’s new stadium and I was there for “the return of the king” – Monsieur Thierry Henry.  It was a great game with a fairytale ending but if I’m honest, in the end I came away simply pleased that we hadn’t been hammered 5-0 by the Gooners.

When I was at my parents in Leeds over Christmas I was thinking about the question of my identity.   I was born in Dewsbury, West Yorkshire in 1976 to parents who had grown up in Beeston, South Leeds, where they had lived all their lives, under a mile from Elland Road, Leeds United’s ground.

However in 1979 we moved away from Yorkshire with my Dad’s job, to Bedford.  My Mum tells me that my Grandma was both very upset and worried that they were leaving Yorkshire and had advised them to “do a big shop” before they left as it would certainly be much too expensive to buy groceries “down south”.

So I arrived in Bedford, aged three, with a broad Yorkshire accent, apparently one of our new neighbours used to sit me on her knee and just get me to talk, intrigued by my unfamiliar vowels. Within months I lost my accent and sadly it’s never returned, although I can do a good passing imitation which I use to tease my mum with.  So after 10 years living in Bedford we moved again and ended up in Brighton where I had my most formative years as a teenager.

Aged 19, I headed off to university and law school in Nottingham and at that point, after 17 years of living away, my parents moved back to Leeds, which is where I then returned to during university summer breaks.   When I left Nottingham in 2000 with my then new wife Rebecca, I headed to London to start training to be a solicitor.  I’ve now lived in London for the last 10 years.