England, France and Russia: Living as a mixed race couple

I’m a white girl from an academic middle-class Russian family and he is a black French man, born in France to Senegalese immigrants. When I told my mother my boyfriend was black, the first thing she said was: “Will you be able to put up with what the world will think of it?” “It is a different world,” I replied. So far, I have been (almost) right, writes Liza Bel, a radio journalist who now lives in London with her boyfriend.

Growing up in the post-perestroika Russia and then Latvia, my environment was everything but multi-ethnic. A black person was a surprise on a street. In a small country like Latvia, the few black people living there quickly became celebrities no matter what they did. 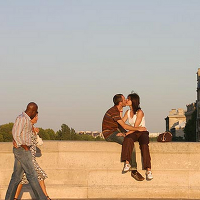 I’ve kept my childhood memory of my first encounter with a person of a different race at a hospital in Moscow, located next to the halls of residence for African students. My parents are still surprised how easily I could settle into a mixed race relationship, when it was not part of my world until the age of 18 when I moved to France.

During the Euro 2012 in Poland and Ukraine, we could see how far Eastern Europe is from accepting ethnic diversity. Would I ever be able to go to Russia with my boyfriend without children pointing fingers at him and everybody turning around? Russian girls dating black men fall under severe criticism. People there still believe black men are untrustworthy and come to have fun with white girls while wives wait for them in Africa. It will take generations for the perceptions to change on that side of the world.

In France, the attitude to mixed race couples, like everything else, stems from the political camp you belong to. The left wing embrace the cultural and ethnic diversity, completely ignoring the question of skin colour, while those on the right side of the political world have much less tolerance to the mix of races.

In Paris, you can get uncomfortable or inquisitive looks from people on the streets, especially from older generations. It is hard to tell whether they disapprove or criticise you. If it is criticism, who is it addressed to? Is it me, a white girl choosing to be with a black man, or the fact in itself seeing a mixed race couple is still surprising? Nobody has ever said anything openly, but one thing is sure that you don’t get those looks from Londoners.

Among foreigners, English people are known for being very indifferent, or tolerant, to other people’s choices in life, be it how you are dressed or whether your partner is from a different ethnic origin. It is quite common to meet mixed race French couples in London: is it because the pressure of the society is less evident or is it just a coincidence? Nobody really speaks about it openly.

What people also rarely tend to say is that there are fewer mixed race couples in middle and upper classes, whether it is in France or the UK. When you go to an upmarket restaurant or private members’ club, you tend to be the only mixed race couple. In every case, however, and in every part of the world there are exceptions to the rule; my family is one of them.

When I asked my boyfriend for any advice on this article, he didn’t know what to say. I also had to concentrate to recollect my negative experiences. The truth is, if you are a happy, harmonious couple, taking your ethnic diversity as a gift, people will tend to care less. Today, I would tell my mother that the world can be cruel but any opinion can be influenced.

Liza Bel and her boyfriend now live in Hammersmith, London and both work as radio journalists.

"RT @sundersays: Immigration will be back in the news this week with the Migration Advisory Committee report. I am talking about immigration…"
".@britishfuture Director @sundersays will be discussing public attitudes to #immigration (incl new @ICMResearch fi… https://t.co/ETJwNQ6ncU"
"RT @lbuckerfield1: Final days to apply for the @britishfuture internship programme - Great opportunity for those looking for experience in…"
"Care workers may fall foul of new migration rules, according to ⁦@Steven_Swinford⁩ for ⁦@thetimes⁩ https://t.co/qMrBzK4CsT"