Iron Maiden sing anthems of Englishness on and off stage

If asked for an example of typically English music, you might think of Edward Elgar, Ralph Vaughan Williams or Henry Purcell. But some amongst us would instead opt for the operatic heavy metal of Iron Maiden, argues Helena Stroud, who recently saw the band live as part of their tour entitled Maiden England. 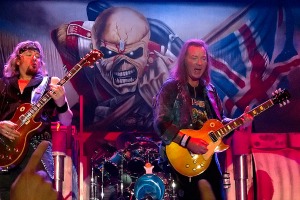 Heavy metal as a genre has deep roots in England. The band widely credited with starting the genre is of course Black Sabbath, who are from Aston near Birmingham, and an unusually high number of English ‘national treasures’ are self-proclaimed metalheads, such as Christopher Lee, who recorded a symphonic metal concept album about Charlemagne, and Brian Blessed, the narrator for Manowar’s new album Kings of Metal MMXIV. The members of Iron Maiden themselves come from Leyton, East London, and are all West Ham Football Club fans.

But it isn’t just that Iron Maiden is a metal band hailing from England. The band is – in an age when English, as opposed to British, identity is too often seen as acceptable only in the stands of a football match – defiantly identified with the concept of Englishness. The inclusion of a Spitfire flypast in their Download Festival set in June was typically Maiden, as was the name of the tour I caught them on at London’s O2 on 3rd August, Maiden England. Iron Maiden is one of the few successful bands out there that straddles both English and British identities with ease, without being either tacky or jingoistic.

This may come as a surprise to people who know only Iron Maiden’s rocker image – loud, heavy metal, coupled with gory artwork featuring their corpse-like mascot Eddie – and the controversy surrounding their album The Number of the Beast, which anxious church groups burnt copies of when it was released in 1982. Iron Maiden, however, encapsulates so much of what makes us most proud to be English: a sense of history, eccentricity and support for the underdog.

Maiden often draw on English literature and culture in their songs. The concept of The Trooper (now also the name of Maiden’s new English ale) is taken from Tennyson’s poem The Charge of the Light Brigade, and Maiden’s longest song at 14 minutes is a prog-metal epic based on Samuel Taylor Coleridge’s The Rime of the Ancient Mariner. Maiden’s tributes to British history can also be found throughout their music, from the Crimean War (The Trooper) to the first world war (Paschendale) and D-Day (The Longest Day).

If this all sounds a little militaristic and aggressive, it’s worth noting that Maiden’s lyrics usually identify with soldiers or people caught up in conflicts, often afraid and confused. In their set at the O2 they played the beautiful song Afraid To Shoot Strangers, written from the point of view of a soldier in the desert. It’s poignant and thoughtful in a way that more mainstream music lovers don’t often associate with heavy metal.

This empathy is reflected in Iron Maiden’s life outside their music. Singer Bruce Dickinson, a lifelong flying fanatic and qualified airline pilot, flew home around 200 Britons stranded during the 2006 Israel-Hezbollah war, and when XL Airways folded in 2008 he brought back more tourists who’d been stuck in Egypt without flights back home.

Shows of kindness such as this, alongside Maiden’s incredible music and theatrical stage shows, have raised them from being simply another heavy band gurning at crowds to something very special. While Englishness is rooted in Iron Maiden’s identity, it’s very clear that you don’t need to be born English to be accepted into the Maiden fold. By encapsulating the most treasured aspects of Englishness, Maiden have created a new and inclusive identity ready to be tapped into by fans from all over the world, which they can claim as their own without prejudice, wherever they are from. It is this sense of inclusion that once again makes them a shining example of both an English and a British band.

Bruce Dickinson, sweating at the end of an amazing O2 show, said it best himself as he stood at the front of the stage reeling off the names of the countries on the fans’ flags: “It doesn’t matter where you’re from, the colour of your skin, your religion, your beliefs… In here we are one nation under Iron f***ing Maiden!”

Helena Stroud is the office manager and executive assistant at British Future.