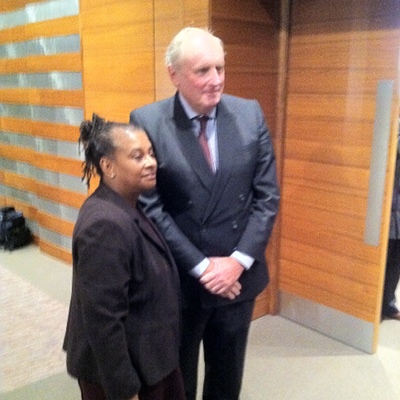 Paul Dacre, Editor of the Daily Mail, with Doreen Lawrence

The government had made a mistake in not having a proper judicially led inquiry into the summer’s riots, former Met police commissioner Ian Blair said today, giving the inaugural Stephen Lawrence criminal justice lecture to the Stephen Lawrence Charitable Trust in London.

“It is not appropriate to be soft on wrongdoing, whether on grounds or race or anything else,” but the criminal justice response needed to be part of a broader effort to extend opportunity in British society, argued Blair.

“To cast the main response to the riots as through the prism of crime and justice is seriously inadequate. And any question about policing to which the answer is plastic bullets and water cannon must be by definition the wrong question,” said Blair.

The event, held by the Stephen Lawrence Charitable Trust, sponsored by the Daily Mail and hosted by Freshfields, the city law firm, also saw a measure of reconciliation between Ian Blair and the Daily Mail editor Paul Dacre, who introduced Blair, referring to “certain differences” there had been between the paper and the Met during Blair’s three-year stint as commissioner.

So Blair praised Dacre’s personal decision to name and challenge the alleged, but uncharged, suspects of the Lawrence murder as murderers as “one of the great editorial calls”.

“Mr Dacre, you changed history”, he said, noting that the campaigning front-page had been crucial to the McPherson inquiry’s recommendation and the government’s decision to change the ‘double jeopardy’ laws, so enabling the conviction of two of the suspects for murder.

But Blair also challenged Dacre and the Mail’s scepticism about the priority he had given to diversifying the Met police force.

“Much derision has been heaped on the Met for its diversity policy. I also think you and Richard Littlejohn have been wrong about that”, said Blair.

This had not just been a moral imperative, or a matter of fairness to individuals. For the police, Blair argued that diversity had also been an “operational necessity”.

He cited the importance of having officers who spoke Yoruba in making a breakthrough in the Damilola Taylor murder case.

Doreen Lawrence, opening the event, said that she was grateful for the achievement of “partial justice” after eighteen and a half years of turmoil, in convicting two of those who she believed had carried out the murder.

“Partial justice shows that the justice system can work”, she said.

Ian Blair later said too that the campaign for justice was “a campaign, it should be emphasised, which is not yet over”.

And Paul Dacre also said that “while the Stephen Lawrence case helped to change the landscape of our society in many ways, there is still a very long way to go”.

The verdict had been important for the Lawrences, for the police in “wiping out this blot on the Yard’s history”, and for British justice, in showing that it could offer redress for those of any racial background.

It had also demonstrated the value and importance of a campaigning free press, Dacre said:

The event also sought to raise awareness of the work of the Stephen Lawrence Charitable Trust, which intended the Lawrence case to have a social justice as well as a criminal justice legacy.

“Stephen Lawrence has become a metaphor for individual and indeed institutional racism”.

But this depended on finding effective ways to change attitudes that are deeply entrenched, he said.

The Trust particularly sought to work with “the invisible middle”. There were programmes to support the most gifted and talented, and preventive resources were found for those who are troubled, but the wheel that doesn’t squeak tends not to get any oil, said Anderson-Walsh.

“What has been achieved in Stephen’s name is incredible. The question is ‘can we achieve more?’” asked Doreen Lawrence, seeking with the Stephen Lawrence Trust to give more young people the opportunities which Stephen Lawrence had been denied.

There were serious financial pressures on the Trust, as there were on other black-led civic society organisations, said Anderson-Walsh.

“A mere tithe of one tenth of a bankers’ bonus could solve our problems today”, he said, in appealing for support.