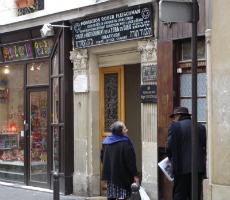 At the end of February, on the eve of Tottenham Hotspur’s match against Olympique Lyonnais, around 50 masked thugs attacked the Smoking Dog, an English pub in the French city of Lyon. Eyewitnesses said the culprits made Nazi salutes in an incident that left one man with a broken arm. The violence came only a few months after a grenade attack on a kosher supermarket in Sarcalles and less than a year on from shootings at a Jewish school in Toulouse. Provoked by events such as these, a number of Jews are crossing the Channel to establish a new home. Their numbers are now large enough to justify a new French service in a synagogue in London’s St. John’s Wood. Are French Jews right to make the move asks Jemimah Steinfeld.

“The Stephen Lawrence inquiry really put a focus on hate crime in a way other countries have not yet experienced,” said Paul Giannasi, a police superintendent and spokesperson for the Hate Crime Programme of the police, who has worked with the police in France on occasion. Giannasi highlights that France not only has more headline incidents than the UK, but also a larger problem with the desecration of Jewish graves. Britain actually records more incidents of antisemitism than France. However, that is “partly because of a high level of transparency and commitment in the UK,” Giannasi explained.

Stephen Shashoua, director of Three Faiths Forum (3FF), a UK organisation dedicated to building understanding between people of all faiths and beliefs, also spoke of differing levels of openness between the two countries and how this affected the environments.

“Anything that is suppressed in a community will find other ways to come out. If dialogue is shut down and if one part of your identity cannot come to the fore, it’s problematic,” he noted. Shashoua believes that dialogue is one of the best ways to counter antisemitism. France has less open dialogue, being restricted by laïcité. This concept, which denotes the absence of religious involvement in government affairs as well as absence of government involvement in religious affairs, can be counterproductive. Shashoua explained that when 3FF tried to do work in France they came across difficulties. For example, they could not use terms such as Muslim and instead had to use a person’s country of origin when classifying them. By taking away the name, it does not take away the identity though.

The UK, on the other hand, has no such concept and instead has communities willing to converse on these issues. “Direct engagement is the best way to counter prejudice between groups,” said Shashoua, explaining that the infrastructure for engagement is much greater here than in France.

France, whose overall population size is roughly two million more than the UK, is home to Europe’s biggest Jewish community, with some 500,000 Jewish people housed within its borders. Britain’s is estimated to be half of that, at around 230,000. According to a report published recently by SPCJ (Service de Protection de la Communauté Juive), the security unit of the Jewish communities of France, antisemitic incidences increased from 389 in 2011 to 614 in 2012. These figures do not vary too much from Britain, but what does vary is the violence involved. In 2012 there were 102 violent attacks in France against 69 in the UK. One in four attacks in France also involved a weapon.

Even if antisemitism is not proportionately bigger in France, the perception that it is seems to be. In a poll conducted by The Israel Project in March 2012, 26% of those surveyed said they were considering emigrating due to antisemitism, on top of those who have already left. And the UK might not be such a bad choice. In British Future’s recent report, The Integration Consensus 1993-2013: How Britain changed since Stephen Lawrence, a sample of people were asked to say how much prejudice they perceive certain groups to experience in the UK. On a scale of hardly any to a lot, only 14% believed that Jews experience a lot. This was a similar statistic to Christians, who were believed to experience 11%. By comparison, the highest perceived levels of prejudice are directed at Muslims at 54%.

According to Mark Gardner of the Community Security Trust (CST), an organisation that advises the UK’s Jewish community on security and antisemitism issues, Jews in the UK largely live their lives free from fear.

“British Jews are, by and large, able to lead whatever Jewish life they do (or do not) wish to lead. Antisemitic race hate attacks do occur, and can of course be traumatic for the victims, but in Britain they have tended to be less violent than in France and so they have had less of an impact upon the community as a whole.”

Not everyone believes there is a marked difference between the situations in the two countries though. Speaking on condition of anonymity, one Jewish man in his late 20s, who used to live in a suburb of Paris and now resides in London, said he never felt any real or perceived antisemitism in France. His move across was solely motivated by career progression. He did also note that he has yet to experience antisemitism in the UK.

Jemimah Steinfeld is a freelance journalist living in London.

"What can advocates can learn from the #immigrationbill debate and u-turns on policy towards NHS staff and carers?… https://t.co/M36saOh7wb"
"RT @childrensociety: When asked by @stephenctimms, @BorisJohnson did not understand why migrants with leave to remain had 'no recourse to p…"
"RT @jillyrutter: At @britishfuture we've long argued that parks can bring communities together and strengthen cohesion. In the last 8 weeks…"
"#RefugeeWeek2020 is coming! From 15-21 June we'll be celebrating the contributions of refugees to Britain. Here are… https://t.co/KOKukj92y9"