At the centre of a small village in the mountainous Salt Range region of Pakistan sits a nineteenth century British cannon. Dulmial – known within Pakistan simply as ‘the village with the gun’ – was presented with the artillery piece in 1925 in recognition of the service and sacrifice of the village’s inhabitants prior to and during the First World War. 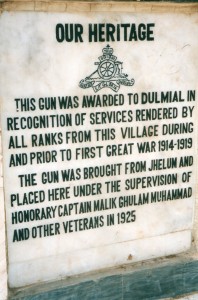 Plaque attached to base of monument. Photo: Irfan Malik

Dr Irfan Malik and Michael Noble, of the Centre for Hidden Histories at the University of Nottingham, wanted to bring the fascinating story of why a nineteenth century Scottish cannon is proudly displayed in a village in the mountains of North Eastern Pakistan to a new audience here in the UK.

Research into the public’s attitude towards the First World War centenary commemorations in Britain found that many people feel that learning about our shared history is important for integration and understanding our diverse modern society. 45% of people also felt that there had not been enough coverage or resources devoted to the contribution of the soldiers from the Commonwealth and the Empire.

Echoing this sentiment, Dr Malik said “my aim is to reflect and remember the immense courage and sacrifices of the Indian soldiers 100 years ago. I don’t wish them to remain ‘forgotten’ any longer.”

A century ago, the area in which Dulmial lies was part of British India, which meant that its inhabitants were drawn into the Great War on the side of the Allies. A settlement steeped in military history, Dulmial sent 460 men to fight in the British Army, contributing to the 1.2 million strong force from undivided India that fought with the British during the First World War.

These 460 soldiers formed the largest single contribution of any village in Asia, and included both of Dr Malik’s great grandfathers, Mohammad Khan and Ghulam Mohammad, a fact which he describes as being “a great honour and privilege”. 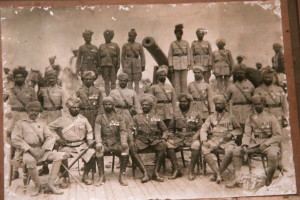 In 1925 the British Government offered Dulmial an award of their choosing in recognition of their significant military service and sacrifice. The man in charge of choosing was Captain Ghulam Mohammad Malik, the highest ranking and most decorated soldier of the village. A career soldier of great experience, he chose to have Dulmial’s contribution recognised with the presentation of a cannon.

On the 10th November 2014 the British High Commissioner to Pakistan, Mr Philip Barton CMG OBE, unveiled a plaque in honour of three soldiers from modern day Pakistan who were awarded the Victoria Cross during the First World War. Community members from Dulmial Village were present, as well as a descendant of Khudadad Khan – the first Indian and first Muslim recipient of the Victoria Cross.

High Commissioner Barton said: “As we honour Pakistan’s three recipients of the Victoria Cross…we should remember the sacrifices made a century ago that helped shape our present world. People from different nations came together to uphold our way of life.”