The case of the peer, his antisemitic comments and how not to do diversity in politics

Lord Ahmed’s comments blaming his imprisonment for dangerous driving on a Jewish conspiracy are absurd and extreme. This is far from the first time the peer has promoted outlandish conspiracy theories. He even suggested recently that the schoolgirl Malala Yousafzi may have been shot as part of a conspiracy to discredit the Taliban, before withdrawing those comments. Parliament needs to consider how diversity is addressed, and action needs to be taken to remove peers when necessary, says Sunder Katwala.

The Labour party has acted quickly to investigate, suspending the peer. There seems little doubt that they would remove the Labour whip from the peer if the comments which were first publicly reported by The Times newspaper today are shown to be accurate. The unified reaction to these comments illustrate the breadth of the democratic consensus that such lurid antisemitic remarks should be unacceptable in any of our mainstream democratic parties, along with all other forms of racism.

But it is worth stopping to reflect on a broader question too. How and why did somebody holding Lord Ahmed’s antisemitic prejudices get given a prominent Parliamentary platform? He was appointed, not elected. Here is a clear case of appointing a peer without due care and attention.  As the Times editorial noted: “A community leader and representative of a democratic party should confront anti-semitism. Instead, Lord Ahmed exemplifies it.”

That is all the more highly regrettable when our political system still appoints people to Parliament for life. Indeed, our democratic system keeps peers there, even in cases of criminality and fraud, like that of Lord Archer, or those jailed over expenses. Labour can withdraw the whip, yet we will all remain stuck with an antisemitic Parliamentarian with a Parliamentary seat for life. If we are going to persist with an appointed upper chamber, as now seems likely for the foreseeable future, there ought to be some mechanism by which peers can lose a seat. Requiring a large super-majority vote on expulsion by both Houses of Parliament, for example, could make this possible in especially egregious cases, while protecting against this being used for partisan purposes.

It is no coincidence that the appointment of Lord Ahmed to Parliament in 1998 also took place at a moment in our recent political history when the major political parties seemed to have stalled entirely on making their elected representatives more representative of Britain’s growing diversity. Just four of over 180 Labour MPs elected in the 1997 landslide were from minority backgrounds, with a single British Muslim MP elected for the very first time. The group was no more diverse than the Labour benches before 1992. The Conservative and LibDem benches were entirely white, with the only Tory MP from an Asian background in the previous Parliament losing his seat.

That failure seemed to lead to a period when appointment was preferred to election to try to make politics more diverse. This led to several strong appointments, particularly of those with strong reputations in academia, civic society and other fields. But, however well intentioned, this can also prove a shallow approach if the parties fail to genuinely engage across British society, and instead seek to make the odd appointment here and there to ensure that they could present a more diverse public face.

Frankly, excessively mono-ethnic parties which rely too heavily on such a model risk getting played by claims to “community leadership” from unrepresentative voices, especially where they have lacked the knowledge to scrutinise such claims, without which they struggle to make public appointments on the basis of merit from any and every part of our community.

The Ahmed episode captures some of the dangers of a top-down and out-of-touch approach to attempting to increase Parliamentary diversity, which risks producing quite the opposite impact to that which was intended. That is why it is so important to make progress by democratic election, not merely by the short-cut of appointment. This is more likely to produce politicians who will expect to have been more rigorously tested in the process of selection and election than was ever the case with Lord Ahmed.

The major parties have begun to accelerate progress on diversity in the House of Commons too, and that was particularly evident in the doubling of MPs from minority backgrounds in 2010, which reflected good progress in both the Labour and the Conservative parties, making ethnic representation in British politics less vulnerable to the swing of the party political pendulum, though the Liberal Democrats have failed to make similar progress so far. 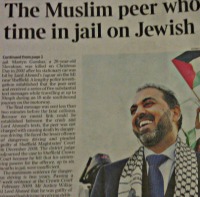 Lord Ahmed story in the Times

Yasmin Qureshi, Shabhana Mahmood and Rushanara Ali being elected finally helped to break the pattern where, despite the exception of Dianne Abbott in the pioneering group of 1987, it was too often assumed in the decade afterwards that ethnic minority MPs would be men and female MPs would be white, sometimes leading to competitive grievances being articulated by supporters of one cause or the other.

Each of the eight MPs from British Muslim backgrounds have different personal relationships with their faith and heritage, and take a range of often nuanced views on the role of faith and identity in our shared multi-ethnic society – and none would wish their political careers to be defined by that dimension alone.

Conservative MP Sajid Javid, economic secretary to the Treasury, has set out his personal view as a “proud British-born Muslim” that, if he had to leave Britain to live in the Middle East, he would choose Israel as the place where his children would be most likely to feel the “warm embrace of freedom and liberty”.

Labour’s Sadiq Khan wrote after the 2005 election, and the 7/7 bombings, that “no matter how hard I try not to allow my faith to define me as an MP – no matter how many times I ask not to have my religion precede my occupation when I am introduced or described – the fact is that others do often define me by my faith.  I have never run away from the responsibility of being a minority MP in Parliament. It is a fact that in a city where 10 per cent of the population is Muslim – a city represented by 74 MPs – I am the first and only MP of Muslim faith in London. Two months after I was elected we suffered a terrorist attack killing Londoners of all faiths – and of none – and of course the three other British Muslim MPs and I were expected by government and the media and the Muslim community to play our part in the capital’s calm and unified response. So, yes, inevitably I have found that I am indeed a Muslim MP and I have those responsibilities. But perhaps the test of our success is whether – at some point in the future – the faith of MPs will matter less and their beliefs and their ability to stand up for all their constituents will matter more.”

Khan is right that having a critical mass of MPs from across the different ethnic and faith backgrounds to be found in British society is, ultimately, the only way to ensure that we do not place the impossible and unreasonable burden of “representing” entire communities on the one or two MPs who make a breakthrough.

Crucially, that would also limit the damage of absurd comments from individuals like Lord Ahmed seeming to confirm, for some, the worst caricatures and stereotypes of British Muslim opinion.

It is very important to challenge antisemitism and racism in all forms, and from all quarters. But it would be wrong to think that antisemitic views are representative of Muslim opinion, just as it would be to accept Nick Griffin’s claim to speak for what most white Britons think.

Dilwar Hussain, of the Policy Research Centre at the Islamic Foundation, told me that he feels frustrated that some Muslims still feel the need to blame someone else for their problems. He argued that for their own good Muslims need to take responsibility and face the challenges that they are faced by. “We have to reach a new politics that goes beyond these sectarian and communitarian positions,” he said, adding that “an important task right now is to bridge the divides between so called ‘communities’ and heal the rifts that the identity politics of the last decade created.” His challenge is a serious one to figures of ‘Muslim leadership’ that they need to be more forthright in standing for the common good and engage more honestly the plethora of questions that the public debate on Muslims throws up.

The political parties have a responsibility to respond to these challenges in a proactive as well as a reactive way. As well as dealing swiftly and sensibly with the extreme views of Lord Ahmed, Labour and the other parties should redouble their efforts to ensure they are helping to provide prominent public platforms, in the Commons, Lords and elsewhere, to those voices who do reflect the democratic and anti-racist views of the vast majority of British Muslims. There are many voices working constructively to improve community relations in Britain, across the full range of different ethnic and faith backgrounds, yet so many of them express the frustration that they get so little airtime in public debate compared to the idiotic and extreme fringe.

Our political parties should stand clearly against all forms of racism. They have a responsibility to play their part in working constructively to change that imbalance of public voice too.