The World Cup: a tournament of nations and migrants 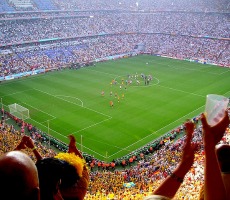 “The imagined nation of millions is never more real than as a team of eleven named individuals,” wrote Eric Hobsbawm.

That may need updating for the age of tactical squad rotation, but the football World Cup remains the most popular international celebration of nationhood. That makes the 2014 World Cup a global showcase for how generations of migration and integration have reshaped national identity as a civic ideal.

Strikingly, two-thirds of the footballers at the World Cup are migrants. Of the 736 players selected for the tournament, no fewer than 478 (65%) live and work outside the countries whose shirts they wear, while just 258 play at home, according to British Future analysis of the 32 World Cup squads.

This migrant-majority World Cup mostly tells a story of skilled emigration, reminding us that migration is also a game of two halves.

Only Russia takes an entirely insular view – the only country to pick a World Cup squad of 23 from players who all live and work at home. And even they are overseen by Italian coach Fabio Capello, the former England manager.

The England squad are a close second to Russia when it comes to playing at home not away – with 22 English Premier League players joined by a goalkeeper based in Scotland, Fraser Forster, who made the short trip from Newcastle to Glasgow’s Celtic.

But England tops the league for receiving the skills of the World Cup migrants. One in six World Cup footballers live and work here: 119 players, including 97 who will play for 27 other World Cup teams, placing England well ahead of Italy (63), Germany (58), Spain (51) and France (37) as hosting World Cup migrant players.

The England team itself is the product of integration rather than immigration. Raheem Sterling came to England from Jamaica as a five-year-old. That at least eight of his 22 English-born team-mates are the sons or grandsons of migrants simply reflects the demographic pattern of modern England: ESRC research shows that over a third of the population of England have at least one parent or grandparent who was a migrant from outside Britain.

The migrant heritage of our Three Lions includes the Irish roots of Wayne Rooney, the Spanish heritage of Adam Lallana and Phil Jageilka’s Polish refugee grandparents of Phil Jagielka, who arrived in Manchester during the second world war. Jageilka’s father first learnt English when he started school.

Nobody finds anything remarkable about the everyday reality of our multi-ethnic England team. You do need not be born in a country to wear its shirt with pride. Eighty-three World Cup footballers (11%) were not born in the countries they represent – more than one in each of Hobsbawm’s XI. Many more are the children and grandchildren of migrants.

Australia’s Socceroos are an entirely home-grown bunch. Only Dario Vidosic was born abroad, and he arrived as a one-year-old from Croatia when his father went to play soccer in Melbourne. The names of born and bred Aussies such as Mark Bresciano, Eugene Galekovic, Massimo Luongo, Ryan McGowan and Matthew Spiranovic now tell the story of Australian integration.

The European players most often talked about in their national media as symbolising the changing face of the nation – such as Germany’s Mehmet Ozil or Belgian captain Vincent Kompany – were also mostly born in the country they represent. As Ozil has said: “I am third generation in Germany: my father grew up here. Turkey will always be a special country for me but I did not doubt my decision to play for Germany – ever.”

Perhaps unexpectedly, it is the USA team whose foreign-born players have sparked public controversy this year. Former coach Bruce Arena has been among those to criticise coach Jurgen Klinsmann, suggesting that he may be seeking the Germanification of Team America.

But there are losers as well as winners from World Cup migration.

The country of birth most likely to be rejected by a World Cup footballer, to play for somebody else, is France. No fewer than 25 French-born footballers will represent other teams in Brazil, ahead of Germany (14) and Brazil (5). Sixteen of the Algerian squad of 23 being born in France. This partly reflects an active Algerian strategy of diaspora recruitment, broadly similar to that which took the Republic of Ireland to several World Cups. But do the number of French-born players in the Algeria, Cameroon, Ghana and Ivory Coast sides also say something about the shortcomings of French integration?

Cameroon player Assou-Ekotto, born in Arras, France to a French-born mother, thinks that it does. He has spoken about his surprise at finding that his black British Tottenham team-mates naturally think of themselves as English. He told the Guardian that “the country does not want us to be part of this new France. So we identify ourselves more with our roots.  Me playing for Cameroon was a natural and normal thing. I have no feeling for the France national team; it just doesn’t exist. When people ask of my generation in France, ‘Where are you from?’, they will reply Morocco, Algeria, Cameroon or wherever. But what has amazed me in England is that when I ask the same question of people like Lennon and Defoe, they’ll say: ‘I’m English.’ That’s one of the things that I love about life here.”

Yet the French 2014 squad does again capture the story of migration to France. Two of its players were born abroad – and more than half of the French squad have migrant heritage. Lille midfielder Rio Muavba’s father had played at the 1974 World Cup for Zaire.

The European country to benefit most from migration into its football team is probably Switzerland, with six foreign-born players, including four from the former Yugoslavia, and another half a dozen players of migrant heritage. Swiss football fans certainly feel that they have developed a much less predictable and more creative attacking football team – but the recent referendum shows that it hasn’t resolved the country’s anxieties about immigration.

Perhaps that Swiss experience captures a strange ‘double life’ of immigration. For the next month, the popular press across Europe will be packed with stories about migrants – just as long as you turn to the back-pages. ‘Immigrant’ tends to be a term we reserve for the unfamiliar, unknown foreigner – which may be why we seldom notice that so many of our football heroes are immigrants too.

This article has been edited for British Future. A longer version of it originally appeared in the New Statesman here.