Some of the St George’s flags have come down already, some are still flying, albeit a little sadly. With England now out of the World Cup, the tournament effectively ended for many people when we lost 2-1 to Uruguay. For others it means they can now relax and start enjoying the football, writes Sunder Katwala. 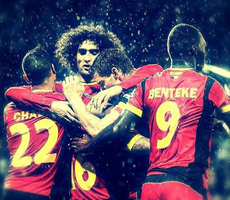 Some fans in Britain will now be rooting for the team containing a player from their club. Sunderland fans will be backing the USA now that striker Joze Altidore looks likely to recover from injury to play in the knock-out stages. Evertonians like myself might also support the Americans for the sake of keeper Tim Howard, though Belgium boasts two of our stars in Kevin Mirallas and loanee Romelu Lukaku. Swansea City fans may enjoy the tournament more than us if they back the impressive Netherlands side for the sake of Jonathan de Guzman and stopper Michel Vorm.

As British Future’s analysis has shown, the World Cup was already a migrant-majority tournament and, as we enter the knock-out stages, countries with more players who play abroad have been more likely to progress, reflecting the importance of skilled emigration in football today.

The 16 countries have qualified for the knock-out stages have 260 players who live and work in other countries, while 108 play their football at home.

Strikingly, of the seven countries who had mainly home-based squads, five have been eliminated in the first round, with Russia joined on the first plane home by the would-be European footballing powers of England (22 home-based players), Italy (20), Spain (14), as well as the minnows of Iran, 14 of whose squad play at home.

Of the mainly domestically-based squads, only Mexico, who have 15 home-based players and eight who play abroad, and Germany, with 16 of their 23 players who play at home, remain in the hunt.

Part of the explanation is the relatively poor performance of European nations. Fifty-four percent of the players representing European squads play abroad, compared to three-quarters for the non-European countries. This trend was confirmed with the elimination of Russia by Algeria, which saw the World Cup lose the one team which was entirely domestically-based, with Fabio Capello picking 23 players who play in the Russian league. By contrast, 16 of the Algerian squad were born abroad, in France, and 21 of the squad play outside Algeria.

In fact, 47 of the World Cup footballers left at the tournament were born outside the country that they represent; more than one in 10 of the 368 World Cup players remaining.

In some cases, their contribution has made the vital difference to the nation’s progress, as with the hat-trick scored by Swiss footballing hero Xherdan Shaqiri to secure qualification for the next round. The Yugoslav-born player is a dual Swiss-Albanian national, scoring goals for his adopted nation. Indeed, all seven Swiss World Cup goals have been the product of immigration and integration. It remains to be seen whether Swiss pride in the goals of Shaqiri, Admir Mehmedi, Haris Seferovic, Blerim Džemaili and Granit Xhaka may help that migrant sceptic nation to see that there can be benefits as well as pressures when people cross borders to join a new society.

While there has been some debate about whether the strength of attraction of the Premier League for global talent is affecting the development of the England team, perhaps it would also boost England’s long-term chances if at least a few more of the emerging younger stars were to gain some experience in Spain, Italy or Germany ahead of the 2018 and 2022 tournaments, as Greg Dyke’s FA football commission has suggested.

Despite England’s World Cup exit, the English league remains the most strongly represented in the knock-out stages of the World Cup. In that respect, we are (sort of) winning the World Cup.

Sixty-four of the players left at the World Cup (17%) play in England. Only the Swiss are without any English club affiliations, of those teams who remain at the tournament. All of the clubs who played in the Premier League last season are still represented, except for Crystal Palace and Hull City. Beyond the Premier League Leicester, Middlesborough, Nottingham Forest, Watford and Wigan all remain represented in the tournament’s knock-out stages. Arsenal (8), Chelsea (7), Spurs (6) have the most players, with Liverpool, Manchester City, Manchester United and Newcastle all having five players remaining.

Scotland’s Premier League is represented by Celtic player Efe Ambrose in the Nigerian squad. Greece qualified from the group stage with a last minute penalty from George Samaras, who is leaving Celtic after six seasons in Glasgow.

The French squad itself contains 10 English-based players and eight who play in France. That may not quite persuade English fans, watching the World Cup as neutrals, to cheer for France. And in any event, the French squad is pipped by that of Belgium, who have 11 players who live and work in England.

Perhaps then, we should see out the next phases of the tournament wrapped in the St George’s flag and once again show our support for ‘plucky little Belgium’.